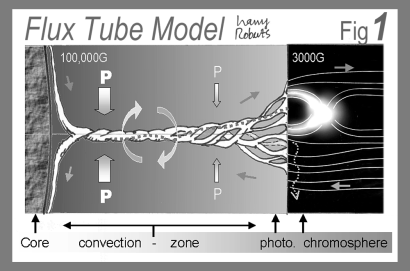 “Giant Magnetic Squids!”- a scary idea, eh? Right now Readers, the giant “squids” are not scary enough! This is the sad tale of sunspots today.

A Sunspot is born: spots announce their approach with a patch of low power field and some bright faculae on the sun’s surface (the photosphere).

At such a time a huge “squid-like” magnetic structure is said to be rising from the solar “depths”, growing bigger as confining pressure drops– and near the surface it unravels, with “ropes” of opposite polarity breaking through as small unipolar spots (Fig 1). In WL we see the spots emerge and grow larger over a few hours. With magnetic “eyes” we see the spots are separated into opposite polarities with a neutral zone between.

In EUV and X-ray bands we see magnetic arches above the site grow bigger; some to become ‘open’ field – and stream into space, changing the shape of the corona over vast distances.

Sunspot fields: Magnetic fields within the spot’s umbra (the ‘cooler’ centre) emerge vertically, while in the surrounding (grey) penumbra they bend over to near horizontal, some may turn back below the surface.

Spot fields are strongest in the umbrae, from 1500G to >3000G (Gauss). And for a penumbra to form umbral fields must be > 2000G; spots with weaker fields often lack penumbrae.

The strength of umbral fields is thought to indicate the power of fields at the unseen solar core, and the state of the solar dynamo. 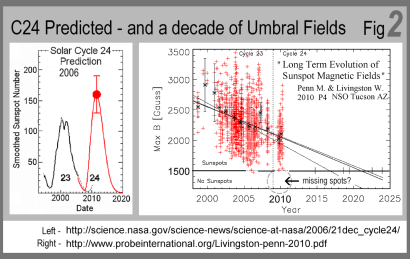 The predictions for the current sunspot cycle and magnetic field strengths for the past decade. Courtesy NASA and arXiv.

Spot activity in 2010: Back in 2006, NASA announced its prediction for C24 (Fig 2), claiming to have an accurate model for solar activity:

As we now know, the longest and deepest minimum for a century ensued; and current C24 activity, in early 2011, is weaker than that recorded (at the same stage) for any cycle of the past ninety years! A disgruntled NASA has ‘denounced’ the sun for “behaving unpredictably”.

In brief, current sunspots are mostly small and short-lived. Their weak fields mean most lack penumbrae, and the umbrae themselves are often hard to see in ‘scopes of any size. Some spots peep above the surface for a few hours, then disappear below (e.g. AR11030 and 11082). Some reappear a few days later –grow a bit – then fade entirely (e.g. AR11098).

And yet plenty of new spot groups emerge, around ten per month, and in 2010 the sun was spotless for only 50 days.

What the Statistics Show: Solar data compiled by J. Janssens from a range of sources tells an intriguing tale. Sunspots of C24 when compared to previous cycles are seen to be fewer in number (Ri) and smaller in aggregate size (A) than those of any cycle since 1920.

Are Spots Vanishing? Recall Livingston and Penn’s provocative thesis in 2006 that “Sunspots may vanish” – and contrast this with NASA’s “biggest cycle ever” prediction – both can’t be right.

In late 2010 the NSO team revised their thesis with current data from C24. The new material (Fig 2) shows, they say, that the umbral fields of current spots continue to weaken at the expected rate – and that spots will be mostly gone by 2017.

In fact, their new data may show that a percentage of C24 spots already fall below the 1500 gauss limit, and are therefore invisible. (Circled on Fig 2 by writer).

What do we now see? C24 made a strong start in 2009, with M class flares, good-sized spots, and large prominences. Yet for most of 2010 activity has been static, or weakening – new spots appear, but many quickly fade; filaments and prominences grow fainter. And while areas of plage without visible spots host minor flares (while spotless AR11121 hosted Goes M1.6 and C9.7 flares 2010 Nov. Sparse AR11069 GOES M1 flare 2010 May), no X-class flare has occurred in four years. Take a look at the sunspot archives and compare the activity of 1998 (2 years into C23) with current maps (2 years into C24) – the contrast is striking.

The Verdict? Weakening umbral fields seem to be the primary cause, with effects on both white light and H-alpha solar activity (spots, flares, filaments etc) – demonstrating that most solar activity is magnetic in origin. Hopes are fading for a big turn-around any time soon – particularly while fields keep declining.

Deep down, at the solar core presumably, something unusual has happened, and we now see the effects at the sun’s surface. Did all the “giant squids” die? Or – like the “rare Norwegian Blue” – are they only asleep?