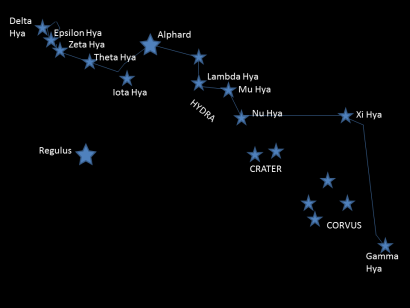 The main stars of Hydra the female Water Snake with a few neighbours as seen from Australia looking east at about 10 pm AEDT in mid February. Image and copyright Nick Lomb ©, all rights reserved

Recently on this blog we wrote about Hydrus the Male Water Snake. Sadly, water is still an issue with Cyclone Yasi in Queensland and heavy rain and flooding in Victoria, so we will continue with the water theme and discuss Hydra the Female Water Snake.

Hydra is the largest of the 88 constellations accepted by modern astronomers. Unlike Hydrus, it is an ancient constellation that is among the oned listed by the second century Greek astronomer Ptolemy. Hence there is a Greek legend associated with the constellation, which is to be outlined below.

According to the Greek legend Hydra was a many-headed monster with a poisonous breath that lived in a swamp. The hero Heracles had as one of his 12 labours the task of killing Hydra. It was no easy task as Heracles had to hold his breath during the fighting to avoid breathing in the monster’s breath. Then, whenever he cut off one of the many heads he found that two grew in replacement. While all this was going on a crab tried to protect Hydra by biting Heracles on one of his feet. After squashing the crab, he found that with the help of his chariot driver (and/or nephew) he could cauterise the wound as he cut off each head so that it did not grow back. After all this effort though, Heracles was told that eliminating the monster did not count as one of his labours since he had had assistance.

From Australia in the evenings of late summer it stretches across most of the eastern sky with the monster’s head towards the left or north above the bright star Regulus while the tail is near the horizon to the right or south.

The only reasonably bright star in the constellation is Alphard, the name of which comes from an Arabic phrase meaning ‘the solitary one in the serpent’. It is a second magnitude, orange-coloured giant star that is 177 light years away.

Gamma Hydra is of third magnitude and is a giant star a little cooler than our Sun at a distance of 132 light years.

Zeta Hydra is also of third magnitude and also a giant star a little cooler than our Sun. It is at a distance of 151 light years.

Though faint, from a dark sky most of the stars of the constellation could be traced with the unaided eye. From Sydney or another light-polluted city binoculars would be necessary.