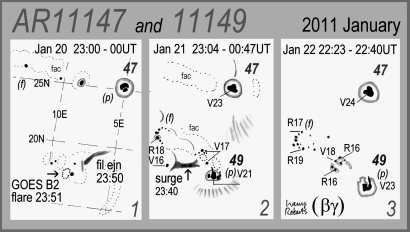 The evolution of sunspots AR11147 and AR11149 over three days in January 2011. Image and copyright Harry Roberts ©, all rights reserved

Given the current dearth of big sunspots AR11147 was a welcome sight as it rounded the sun’s east limb, in brief cloud gaps– a large single spot with penumbra. It was January 16 03:30 UT. Records showed it was not the return of an earlier group – and next day it was seen to have several small spots following (f) the large preceding (p) spot – in fact the group straggled across 10º of solar longitude. 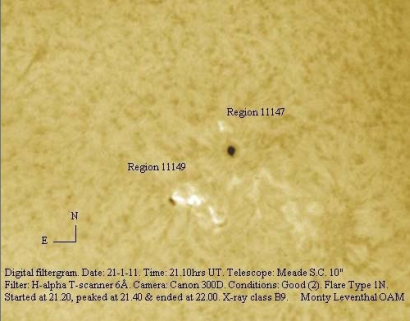 A flare near AR11149 on 21 January 2011, imaged a few hours before Harry’s sketch of the region shown above in fig 2. Image and copyright Monty Leventhal OAM ©, all rights reserved

Minor evolutions occurred as rotation carried the group towards the central meridian (CM) – a light bridge briefly split the (p) umbra; (f) spots changed subtly; there were no flares of note.

The new plage contained a tiny group of spots; in H-alpha a ‘tuneable’ filament ejection was seen, followed by a small GOES B2 flare (Fig1, arrow). The new group lay at the same longitude as the main (p) spot of group 47 and only 7º south of it. Many felt the new spots were part of group 47, and for 24 hours this was how the event was logged.

But both digital and analog magnetograms showed the new group had its own bipolar magnetic signature – it was a distinct new group, but one that had arisen very close to a large existing group (47). The new group was duly named AR11149 (a tiny spot in the sun’s south was AR11148).

Like birds on a wire, sunspots like to keep their distance from each other, tending not to emerge close to existing groups. When this does occur there can be fireworks, as different polarities are forced together. And this is one way in which Hale class Gamma and Delta groups arise. Zirin tells of a case in 1973 –

It is interesting that this was the only active region on the sun and the only EFR (i.e. new spots) in a week came up right in the middle of it. The odds are 5000:1 that it was not a random encounter; the EFR must have been part of a deep-seated complex or guided to the same place by the sub-surface field. (“Astrophysics of the Sun”. P334)

Twenty fours after emerging group 49 had grown (Fig 2), its (p) spots moved westwards while its (f) spots went east – rapidly expanding it to 5º in length, with a cluster of ten or so spots preceding, and a curved chain of small spots following. As group 49 expanded, the following (f) spots of old group 47 vanished, leaving only the large round (p) spot. 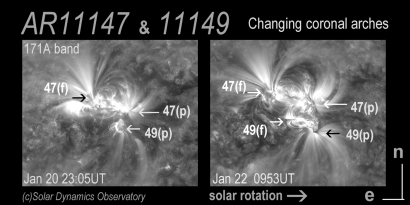 AR11147 and AR11149 imaged by the Solar Dynamics Observatory

Such rapid changes may be due to fields rearranging (reconnecting) as new field emerges – and SDO satellite images confirm this (Fig 4). Fig 4a shows the scene as group 49 emerges – the (p) and (f) spots of group 47 are arrowed, as is the new group 49. Note how the field arches of group 47 remain undisturbed at this early stage.

Contrast Fig 4b : huge changes have occurred as a result of group 49’s new field. The weak field arches that earlier connected spots 47(p) with 47(f) have grown large and bright. Zoom in and see how new arches now connect old spot 47(p) to those of 49(f). And while spot 49(p) has some links to (f) spots in group 49, huge new arches now connect it to unknown points well south of the group (plages perhaps).

Reconnections like these cause flares -and several Class C occurred over the three days described – the strongest GOES C3.3 – almost all within group 49. (And days later as the united groups passed behind the west limb a GOES M1.4 erupted in 49 – the largest flare for almost 3 months).

Magnetograms provide a dramatic view of the ‘collision’ of the two groups. Fig 5a shows the emergence of group 49, and Figs 5d (block arrow) and 3 show the complex polarities making group 49 into Hale class Beta-Gamma.

Thanks to Helio freeware and the WWW, amateurs can draw on a wide range of real-time solar data, as well as their own white light and H-alpha records, and so can monitor some interesting evolutions in those complex entities we (prosaically) call sunspots.