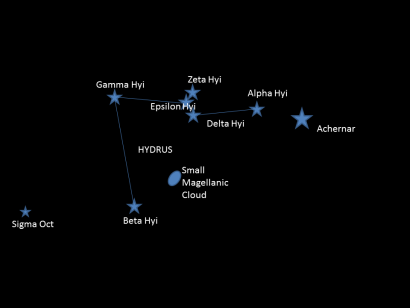 The main stars of Hydrus the Male Water Snake with a few neighbours. Image and copyright Nick Lomb ©, all rights reserved

With floods affecting large parts of Queensland, NSW and Victoria, one of the problems faced by returning residents is that of snakes. On 5 January 2010 Queensland SES operations director Scott Mahaffey was quoted in the media as saying “(Snakes are) in their mating season and they’ve been flushed out of their environment… snakes are very, very cranky right now.”

There are two constellations visible in the January evening sky that relate to water and to snakes, Hydrus the Male Water Snake and Hydra the Female Water Snake. In sympathy with those affected by the floods let us consider the first of these constellations.

Like many southern constellations it is a modern one. It was first plotted by two Dutch navigators Fredrick de Houtman and Pieter Dirkszoon Keyser in the late 1500s, from whose work 12 new constellations appeared. They were on a voyage to the East Indies, which provided the opportunity to observe the southern sky. Keyser died on the voyage, so the work was completed by de Houtman. Some of his observations were made during the two years he spent imprisoned in Sumatra. After his return de Houtman published his astronomical observations bizarrely as an appendix to a dictionary of the Malayan language.

In drawings of the constellation figure the head is near the star Beta while the end of the tail is near Alpha.

None of the stars of the constellation are bright enough to have received proper names accepted by Europeans. The Chinese did name the star Gamma as Foo Pih, the meaning of which is not known.

Some information on the main stars:

Beta has a magnitude of 2.80 and is at a distance of 24 light years. It is also the closest reasonably conspicuous star to the South Celestial Pole – Sigma Octantis is much closer, but is barely visible to the unaided eye even in a dark sky.

Is Hydrus angry? We do not know, but if you get a clear night have a look for the constellation. You could find a few of its stars with the unaided eye, but binoculars would obviously help. The orientation of the diagram above is at about 10:30 pm AEDT and the constellation is then a little to the west or right of due south.