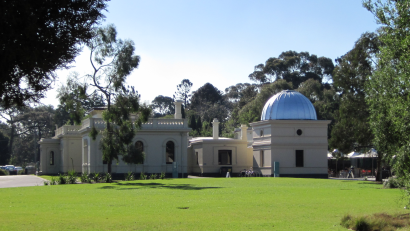 Question from Harry R: A 2006 article by David Hathaway says that terrestrial magnetism is measured at two points on Earth – in UK and Australia.

Where would that be Nick – do you know?

Answer: That is an interesting question Harry. The search for an answer led me on a fairly convulated path that I try to summarise below. Sydney Observatory made magnetic observations for a few decades in a hut built on the meridian at the northern end of its grounds. These observations had to stop once electric trams began running in the vicinity. As far as I am aware the Sydney observations are unpublished.

David Hathaway is talking about the aa index that is used to estimate the effect of the wind of charged particles from the Sun on the Earth’s magnetic field.

Geoscience Australia says that the aa index is based on measurements at “two antipodal subauroral stations: Canberra Australia, and Hartland England.” The Canberra station they refer to is the Canberra Magnetic Observatory in the Kowen Forest ACT. However, that observatory has only been operating since 1979. Where were the measurements taken previously?

A different Geoscience Australia webpage tells us that the first magnetic observatory in Australia operated at Hobart from 1840 to 1854. Magnetic readings were then continued at an observatory set up by the German scientist Georg von Neumayer at Flagstaff Hill in Melbourne.

In 1862 the observations were transferred to the new site of Melbourne Observatory near the Botanical Gardens in 1862. The aa index is taken from data back to 1868. Dr Barry Clark (unpublished, 2007) says that self-recording magnetic instruments were ordered for Melbourne Observatory in 1866. So presumably the start of the aa index is when those instruments arrived and began producing results.

Barry Clark also mentions that in the 1890s Melbourne Observatory had to curtail its operations due to economic considerations. The then director decided that the magnetic observations had to continue in order to maintain the unbroken series of measurements. Instead he cut back on the publically much higher profile programs in meteorology, observations with the Great Melbourne Telescope and public telescope viewing. This was a brave and farsighted decision.

In the 1900s, as at Sydney Observatory, the introduction of electric trams made magnetic measurements difficult from Melbourne. A new site for magnetic observations was set up at the small town of Toolangi, which is about 50 km to the north-east of Melbourne, and just to the north of Healesville. Measurements continued there, even after the closure of Melbourne Observatory in the 1940s, right up to the opening of the Canberra Magnetic Observatory in 1979.

So the short answer to your question Harry is Melbourne-Toolangi-Canberra.

3 responses to “Where are and where were magnetic fields measured in Australia? Are old numerical records worthwhile?”