There has been much talk about the dates of the star signs over the last few days so we thought it might be nice to have the correct dates for each zodiac sign on Sydney Observatory’s website. Most of us aren’t aware that each star sign of the zodiac (which means ‘path of the animals’) is determined by the position of the Sun at midday on the day of our birth.

You can’t see your star sign on that day of course but have to wait several months. Many astrology ‘charts’ use classical dates ie data from around the time of Claudius Ptolemy (c. 90-165) [Ptolemy was an astronomer who – only able to observe with the naked eye – believed that the Earth was the centre of the Universe.] We have to take account of the precession of the equinoxes which is a 26 thousand year wobble in the Earth’s rotation that changes the apparent position of the Sun against the background stars. So we’re now almost 10% of the way through the precession from the time of Ptolemy (which means there will be a whole lot more zodiac date changes over the next 24,000 years).

In the zodiac date ranges following, the first date range in each case is the date range of the astrological sign according to the relative positions of stars, Sun and Earth today. The dates below in each case are as they would have been in Ptolemy’s time, some 1900 years ago. 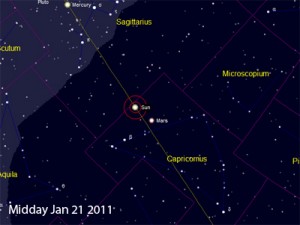 On Jan 21st 2011 the Sun will cross from Sagittarius into Capricorn. 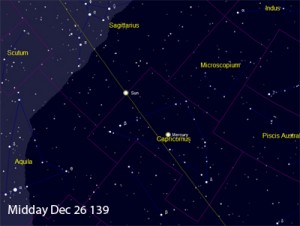 When Ptolemy was around 50 years old, 139AD, the same crossing occurred on 26th Dec including calendrical corrections.

Both of these maps were made with a great freeware program Cartes du Ciel. 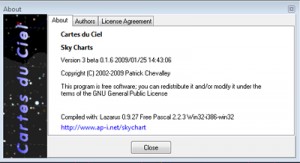 Ophiuchus
Currently 1 December to 18 December – Ophiucus is Greek for ‘serpent-holder’ and refers to the physician who, according to Greek mythology, was said to have learnt the ability to heal people from a snake or serpent; he so successfully healed people that the numbers of people turning up in Hades dropped, so the physician was killed by the gods.
(Was not included in Ptolemy’s time)

10 responses to “Astrology is all mixed up”