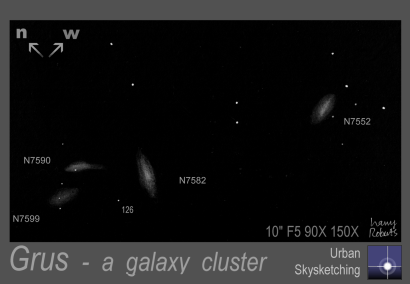 A sketch of the Grus Quartet galaxies from a suburban location. Image and copyright Harry Roberts ©, all rights reserved

After dusk overhead in spring and towards the south-west in the middle of summer, the Grus star group hosts some remarkable deep sky objects, objects bright enough to be seen with ‘scopes big and small from urban sites. And yet the patch of sky dominated by Grus, Sculptor etc looks a bit empty compared to Milky Way areas like Orion or Canis Major say, that rise later in the night.

Grus contains about 30 galaxies brighter than magnitude 13, many grouped in clusters; all are seen best from a “real” dark site, but some are visible in suburbia. After recent views of bigger, closer, galaxies, I tried to track down some of the more distant ones.

Continuing NE from Theta half a degree led to a trio of galaxies, heralded by N7582, a shapely mag 11.8 edge-on spiral, a nice object seen well with direct vision, and appearing much larger with averted vision. N7528 has an elongated bright core surrounded by fainter outer regions.

The other two galaxies, N7590 and N7599 were harder objects with direct vision at my suburban site; N7590 was brightest of the pair with a central core and irregular outline. N7599 was a challenge; distinct with averted vision, but almost invisible with direct, and oval shaped. N7590 and 7599 are magnitudes 11.9 and 12.0 respectively, and tougher “gets” than their brighter companions.

The three brighter members of the ”Grus Quartet” of galaxies were discoveries of James Dunlop, working at Parramatta in 1826 (perhaps with the three inch refractor) [More likely with his home-built 9-inch (23-cm) reflecting telescope that he used to produce the catalogue of 629 clusters and nebulae – Nick] – but fainter N7299 was found by John Herschel at Cape Town ten years later, suggesting a better scope than Dunlop’s [Herschel’s reflecting telescope was twice the size of Dunlop’s and, according to Herschel, seven times the light-gathering power – Nick].

The “Quartet” members are spirals – all about 70 million light years distant and around 80,000 L.y. in diameter – their recession velocity is 1600 km/s – so they are truly a quartet. The sketch suggests they are all “edge-on” – but this is misleading – their elongated cores are much brighter than their outer regions – and mostly the cores were seen – their spiral arms recorded in photographs were not seen either.

While some prefer UHC filters for galaxy viewing none were used for the sketch – but full dark adaption and a head covering were employed – as well as a higher power of 150, which darkens the background and improves contrast.

There is something satisfying in gazing at a cluster of galaxies with your own eyes (rather than Hubble’s) – countless stars and “worlds” in the field of view with, perhaps, myriad unimaginable life forms. Astronomy – it’s so amazing!