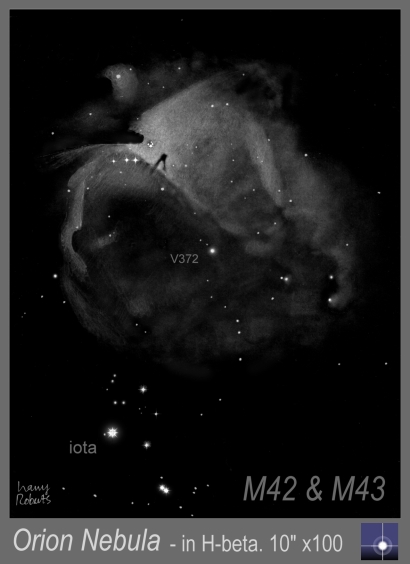 A drawing of the Great Nebula in Orion (M42) as seen through a H-beta filter. Images and copyright Harry Roberts ©, all rights reserved

Christmas/New Year time is “giving time”; and no deep sky target “gives” like Orion’s M42 – even under suburban skies.

Despite “folk-lore” that Hydrogen Beta filters only work on the Horse-Head nebula and the Pelican nebula – I’m happy to report that, at least under urban skies with a bigger ‘scope, they transform the view of M42, showing details normally invisible except at dark sites

The logic goes like this: M42 shines in emission, in several narrow bands –little white light is produced. The main emission bands are H-alpha, OIII and H-beta. H-alpha shines three times more strongly than H-beta – but the human eye can’t see H-alpha (except for very bright sources). OIII shines much brighter than H-beta too, but it seems to do so as a generalised glow over the whole nebula – and the improvement in nebula detail appears minor in OIII.

By contrast, H-beta is close to human peak sensitivity, and hi-lights the hydrogen ionisation areas – I was astonished by the new detail visible. Dark areas outlining the nebula, as well as the “Fishes Mouth” and “Fish-Hook” clouds, were starkly black. And the great swathes of ionised nebulosity that show so well in deep-sky photography were now conspicuous – particularly on M42’s west side (right in Fig). Almost the “whole” of the nebula, including the faintest northern fringes, were seen in the Astronomik H-beta filter – although the faintest wisps surrounding bright star Iota Orionis were not seen– but will be captured I think in future sessions.

Caution: we need a bit more aperture with H-beta: it only passes a third of the available light compared to OIII (or invisible H-alpha) – and with the H-beta filter on the 3” ‘scope the view is just too dim; and I’m yet to try the 4”. Also H-beta slightly suppresses the bright Huygenian region where OIII dominates.

We may review the detailed structure of M42 (Ed. willing) in a future piece on summer’s extraordinary nebula; but based on brief usage an H-beta filter is the perfect “stocking-filler” for an astronomical Christmas, exploring the greatest deep-sky object of them all – Orion’s M42.

Clear skies for the New Year!