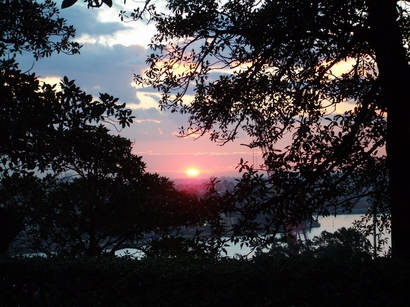 Brrrr! It is starting to be cold. Winter is almost upon us. In Australia the seasons are taken to start at the beginning of the month so that winter begins on 1 June and spans June, July and August. Supposedly, this is because in the early days of the Colony the NSW Corps changed from their summer to their winter uniforms at the beginning of the month. It makes sense though as experience suggests that the coldest days are in the middle of July and hence in the middle of the winter season.

The variation in the length of daylight – sunrise to sunset – during the year 2010, calculated for Sydney. Note the small change in day length from day-to-day at the time of the winter solstice in June and the summer solstice in December. Plot by Nick Lomb

The winter solstice is the day when the Sun provides the least amount of heating so why are the coldest days a few weeks later? This is because it takes time for the ground and the atmosphere to cool down and to come into balance with the heating provided by the Sun.

In some countries the astronomical definition of winter is more prominent than in Australia. As indicated in this press release from the US National Oceanic and Atmospheric Administration, meteorologists prefer to use the meteorological definition of the seasons from the beginning of the appropriate month. In the US, which is of course in the northern hemisphere, meteorological winter is December, January and February.

So feel free to bring out those winter woollies from Tuesday 1 June 2010 as winter has arrived. You do not need to wait until the instant of winter solstice on Monday 21 June 2010 at 9:28 pm AEST, though at least you know that after that time the days will start becoming longer, imperceptibly at first, but steadily.