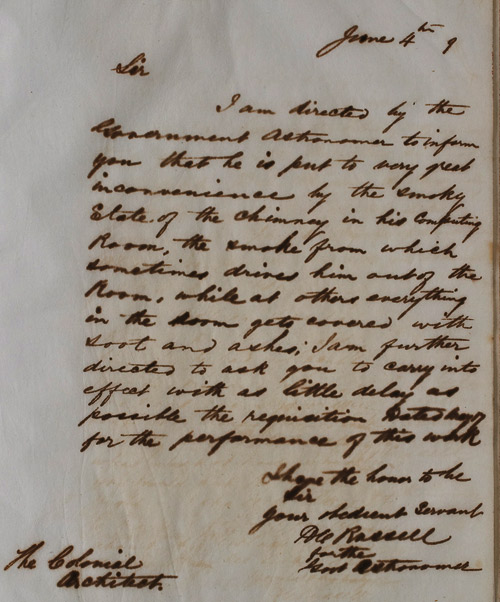 THIS IS THE FINAL LETTER IN A PROJECT COMMENCED ON 5 JUNE LAST YEAR (2008) TO MARK THE 150TH ANNIVERSARY OF SYDNEY OBSERVATORY.

Every day for a year, we have posted the image and transcription of a letter (sometimes more than one) written on (or near to) the day/month date of years from 1858 to 1903. We hope that one day we will find a way to reveal more of the 10,000 letters in the Sydney Observatory letterbooks held by State Records.

I am directed by the Government Astronomer to inform you that he is put to very great inconvenience by the smoky state of the chimney in his Computing Room, the smoke from which sometimes drives him out of the Room, while at others everything in the Room gets covered with soot and ashes; I am further directed to ask you to carry into effect with as little delay as possible the requisition dated May 18 for the performance of this work. Creative Studio: Hope Siafega
Presented by the Powerhouse and TAFE NSW, the Creative Studio is a free digital and creative skills workshop for high-school students in Western Sydney.