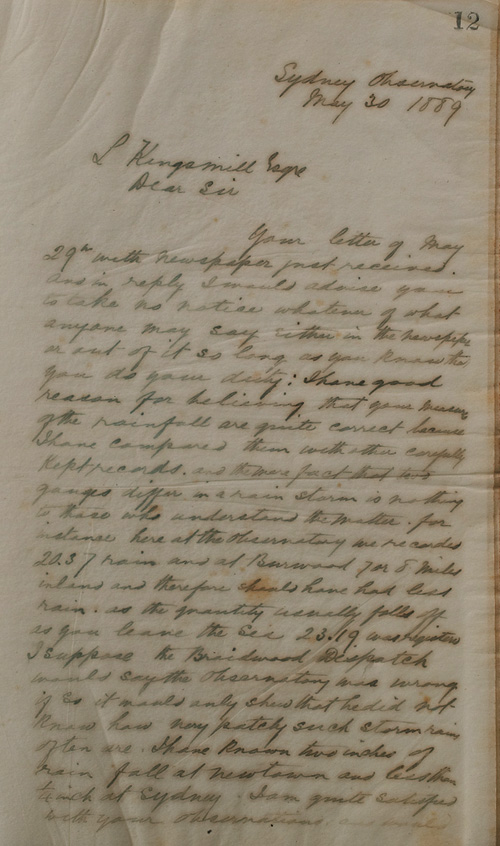 Your letter of May 29 with newspaper just received. And in reply I would advise you to take no notice whatever of what anyone may say either in the newspaper or out of it so long as you know that you do your duty: I have good reason for believing that your measures of the rainfall are quite correct because I have compared them with other carefully kept records and the mere fact that two gauges differ in a rainstorm is nothing to those who understand the matter. For instance, here at the observatory we recorded 20.37 rain, and at Burwood seven or eight miles inland and therefore should have had less rain, as the quantity usually falls off as you leave the sea 23.19 was registered. I suppose the Braidwood Despatch would say the observatory was wrong. If so it would only show that he did not know how very patchy such storm rains often are. I have known two inches of rain fall at Newtown and less than a quarter of an inch at Sydney. I am quite satisfied with your observations and would advise that you act as you always have done: that is supply the information and put up notices of rainfall as if you simply did your duty careless of anyone might say; to act otherwise and let them see that you feel annoyed is only to encourage them to do more to annoy you.

If you knew how often people who know nothing of the subject undertake to teach me in matters which I have spent my life in studying you would not be much surprised at your own experiences.