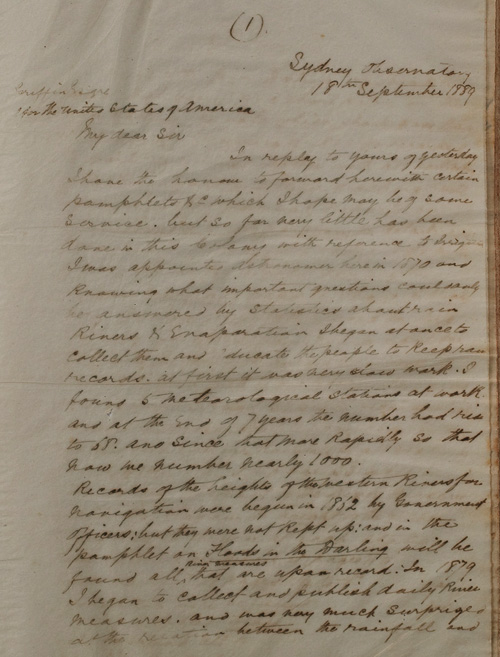 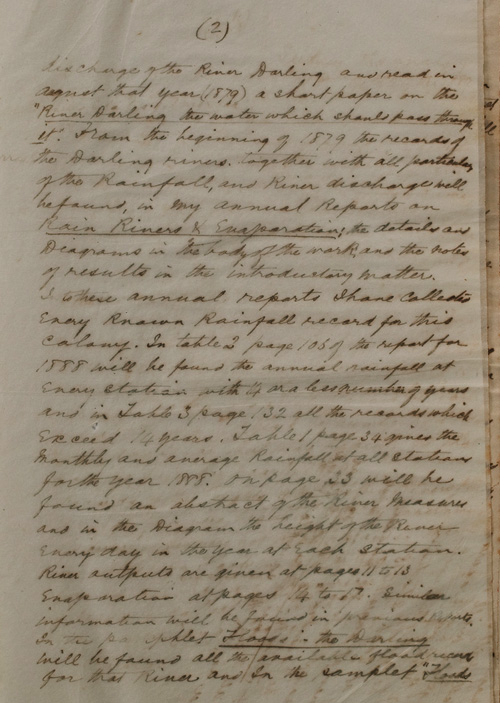 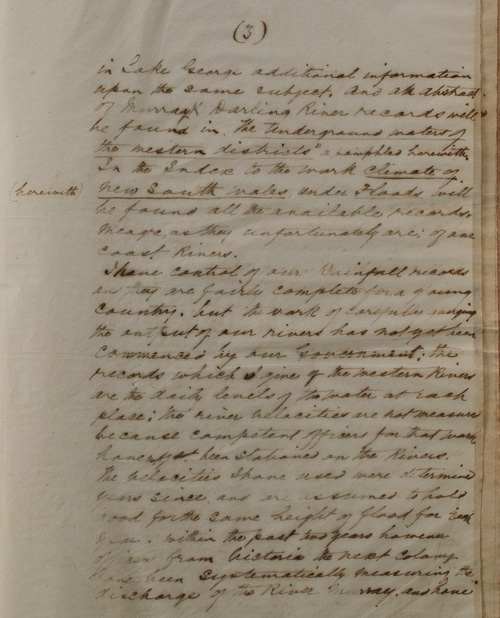 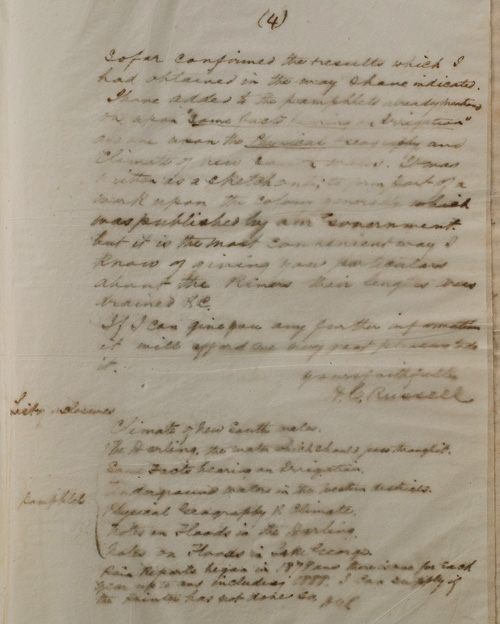 ?? Griffin Esqre
?? for the United States of America

In reply to yours of yesterday I have the honour to forward herewith certain pamphlets &c which I hope may be of some service. but so far very little has been done in this Colony with reference to Irrigation??.

I was appointed Astronomer here in 1870 and knowing what important questions could only be answered by statistics about rain Rivers & Evaporation I began at once to collect them and educate the people to keep rain?? records. at first it was very slow work. I found 5 meteorological stations at work and at the end of 7 years the number had risen to 68. and since that more Rapidly so that now we number nearly 1000.

Records of the heights of the Western Rivers for navigation were begun in 1862 by Government Officers: but they were not kept up: and in the pamphlet on ‘Floods in the Darling’ will be found all river measures that are up on record. In 1879 I began to collect and publish daily River measures, and was very much surprised at the relation between the rainfall and discharge of the River Darling and read in August that year (1879) a short paper on the ‘River Darling the water which should pass through it’. From the beginning of 1879 the records of the Darling Rivers, together with all particulars of the Rainfall, and River discharge will be found, in my annual Reports on ‘Rain Rivers & Evaporation’: the details and Diagrams in the body of the work and the notes of results in the introductory matter.

Into these annual reports I have collected every known Rainfall record for this Colony. In table 2 page 106 of the report for 1888 will be found the annual rainfall at every station with 14 or a less number of years and in Table 3 page 132 all the records which exceed 14 years. Table 1 page 34 gives the Monthly and average Rainfall at all stations for the year 1888. On page 33 will be found an abstract of the River Measures and in the Diagram the height of the River every day in the year at each station.

River outputs are given at pages 11 to 13. Evaporation at pages 14 to 17. Similar information will be found in previous reports.

In the Index to the work ‘Climate of New South Wales’, under ‘Floods’ will be found all the available records, meagre as they unfortunately are; of our Coast Rivers.

I have control of our Rainfall records and they are fairly complete for a young country. but the work of carefully gauging the output of our rivers has not yet been commenced by our Government: the records which I give of the western Rivers are the daily levels of the water at each place: the river velocities are not measured because competent officers for that work have not yet been stationed on the Rivers.

The velocities I have used were determined years since; and are assumed to hold good for the same height of flood for each year. Within the past two years however officers from Victoria the next Colony have been systematically measuring the discharge of the River Murray, and have so far confirmed the results which I had obtained in the way I have indicated.

I have added to the pamphlets already mentioned on upon ‘Some facts bearing on Irrigation’ and one upon the ‘Physical ?? and Climate of New South Wales. It was written as a sketch and: to form part of a work upon the colony generally which was published by our Government, but it is the most convenient way I know of giving you publications?? about the Rivers their lengths, areas, drained &c.

If I can give you any further information it will afford me very great pleasure to do it.

List of enclosures:
Climate of New South Wales
Pamphlets:
The Darling, the water which should pass through it
Some Facts bearing on Irrigation
Underground waters in the western districts
Physical Geography & Climate
Notes on Floods in the Darling
Notes on Floods in Lake George
Rain Reports began in 1878 and there is one for each year up to and including 1888. I can supply if the Printer has not done so.
HCR