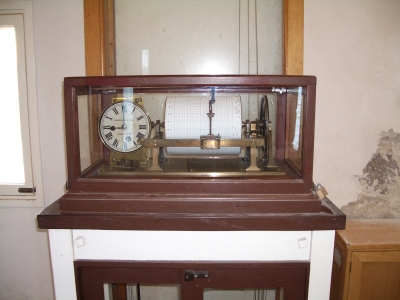 Tide gauges have been measuring tides at Fort Denison ever since George Robarts Smalley, Government Astronomer at Sydney Observatory set one up in 1865. Tomorrow (Wednesday 4 June 2008 at 8:38 pm the high tide is predicted to peak at 2.08 metres. This is the highest predicted tide for several decades though another high tide is expected next year on 25 June. Today’s Sydney Morning Herald reports on the high tide, but the astronomical alignments that cause the high tide are not mentioned as they were deemed too difficult. Here they are:

Each month there are two lots of high tides, one at new Moon and one at full Moon. At those times both the Sun and the Moon are pulling on the oceans in the same line though not necessarily in the same direction. If at one of those times the Moon happens to be at its closest to Earth for the month (perigee) then it is an exceptionally high tide.

Thus the high tide is due to a coincidence betwen the synodic month (new Moon to new Moon) and the anomalistic month (perigee to perigee). The perigee occurs 11 pm Tuesday (3 June 2008) while new Moon is at 5:23 am Wednesday (4 June 2008).

What raises the tide even higher is that the Moon is almost as far north as it can go, mainly because it is winter and it is roughly in the same direction as the Sun, but also because of the Draconic month or cycle. This is node to node and called Draconic as it is related to eclipses and according to some cultures eclipses happen when a dragon eats the Moon. The draconic cycle can increase or decrease how far the Moon is north or south. On Wednesday it is making it 4 degrees further north than otherwise.

Late addendum Thursday 5 June 2008: Sydney Ports Corporation has informed me that the high tide on 4 June 2008 did not quite reach the predicted level at Fort Denison and was 2 cm less, possibly due to the poor weather. However, the predicted level was reached at Botany Bay as recorded at the Bulk Liquids Berth.