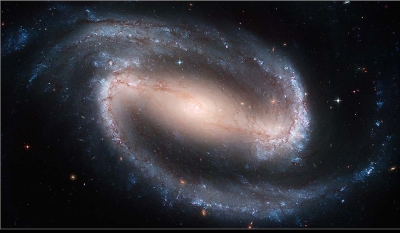 Spiral Galaxy NGC1300. Galaxies like this one are believed to be surrounded by a halo of dark matter. Courtesy of NASA, ESA and The Hubble Heritage Team (StScI/AURA)

An email exchange with Dr Bob Rich, a psychologist and science fiction author with no training in astronomy, could help to illuminate the mysteries of dark matter. Here is day one of our discussions:

I’ve been thinking about dark matter since we talked about that. Looked it up in Wikipedia. One of the articles there said that lumps of it regularly pass through the sun and the earth, and we don’t even know it. But, if it is affected by gravity, won’t that change orbits if the lump is big enough, and be captured and add to mass if it is small and/or slow enough? This sounds to me like a testable thing. The total mass of the earth should be what we can sense, + what has been captured over millions of years.

Good point. The paths of the Earth and of the other planets are continously monitored to phenomenal accuracy and there is no deviation from the motion predicted by the gravity of the matter we can see in the Solar System. This indicates that there are no lumps of dark matter passing through. Dark matter is probably far more spread out with extremely low density in terms of kilograms per cubic meter or even per cubic light year. However, as space is so big even matter with a very tiny density will build up to large measurable masses in terms of galaxy-sized objects. Neutrinos are possible constituents of dark matter – these travel at the speed of light and have only recently been shown to have extremely small, but non-zero masses.

So, you don’t think there are stars and planets and things made up of dark matter?

Not small things like stars and planets but maybe large things equivalent in size to galaxies.