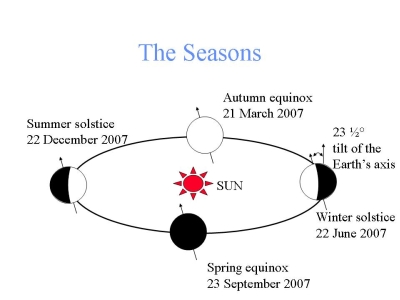 The seasons drawn by Nick Lomb

On Saturday 22 December 2007 at 5:08 pm Australian eastern summer time the Earth is at summer solstice. This is when the Sun appears at its most southerly position for the year and, for those of us in the southern hemisphere, it is the longest day of the year. In Sydney the Sun is above the horizon for 14 hours and 25 minutes. Note though the difference in day length from the day before or the day after is only a matter of a few seconds.

Scientists suggests that the Earth axis is tilted from the vertical because it was struck by another large body during the early years of the solar system, over 4000 million years ago. The collision may even have been the same one that is believed to have led to the formation of the Moon.

On 18 January 2012, Luke R asked why not all the (then 28) comments were showing up. Despite trying to figure it out, I’m afraid we remain stumped on this one. As it seems like an anomaly (all the comments on other 2007 posts we checked are showing up), I (Irma Havlicek, Web Producer for Sydney Observatory) thought the best solution in this instance is to add the comments into the post, so you can see them, which I’ve done here:

Submitted by Luke R on 2012/01/18 at 4:50 pm
Hi there. Thank you for this information. Above states that there are 28 comments in response to this article, and i can see snippets of them in Google search, but i can’t seem to access them here at the actual page. I can only see 2 comments and no apparent way of displaying the rest (clicking on the “28 comments” hyperlink above does not open them). Is there something special I need to do to view them ? Kind thanks in advance.

Submitted by Nick Lomb on 2009/12/31 at 10:59 am
Hello Lynn. The days are shortening but only by a few seconds a day. The sunset times are still becoming later for another week or so but so are the sunrise times. I explain it all here.

Submitted by Nick Lomb on 2009/12/31 at 10:55 am
Hello Barbara. The maximum energy from the Sun reaches the ground at noon (when the Sun is highest in the sky) on the day closest to the instant of summer solstice. The energy is mainly in the form of light, heat (infra-red) and radio waves. The rest of the radiation from the Sun such as X-rays and ultra-violet is blocked by the Earth’s atmosphere.

Submitted by Lynn on 2009/12/27 at 9:45 am
Was the longest day for 2009, 22 December? If so, doesn’t this mean that the the days begin to slowly become shorter? Because I have been watching the sunrise/sunset times on the weather channel, and the days seems to be still getting longer. Thank you.

Submitted by Barbara on 2009/12/21 at 6:29 am
I’m fascinated about reading that this year the time when the Sun’s maximum energy reaches the ground happens to be in the early morning before sunrise? Energy not heat? What type of energy?

Submitted by junemaree on 2009/09/04 at 1:11 pm
Hello Nick
Could you please tell me the exact time/day is our winter solstice Rockhampton Tropic of Capricorn….thanks junemaree

Submitted by Pauline Csuba on 2009/04/04 at 11:51 am
Hi Nick,
I am interested in the solstice energy. Can you tell me where I could find this information in more detail. The energy at this pivotal time is what I mean. Also I thought there was only one solstice, so which is correct; summer or winter? I was always under the impression that it was winter solstice in Australia and Summer overseas, and that we do not celebrate both. Although I have never been a part of any celebrations during this phase.The coming together of so many nationalities has now meant people are confused as to which is correct. any thoughts on this?

Thank you for your assistance.
Pauline.

Submitted by Nick Lomb on 2009/02/03 at 9:40 am | In reply to Luke.
Hello Luke. It is not a silly question, but the answer is no. The day of summer solstice when the Sun appears at its furthest south is not the same day as the Earth is at perihelion, the closest to the Sun. Solstice was on 21 December 2008 while perihelion was 5 January 2009. Though the two dates are only 15 days apart that is purely fortuitous as the date of perihelion will drift through the whole year during the Earth’s 26,000 year precession cycle.

Submitted by Luke on 2009/02/02 at 12:28 pm
Thank you to all for this interesting topic. I hope this isn’t a really silly question…but is the day of the summer solstice also the day that we, here in Australia, start to move away from the sun as we orbit ? I thought I remembered this from school…or am I imagining that ?

Submitted by Nick Lomb on 2009/01/05 at 9:45 am | In reply to Peter.
Hello Peter. Yes the equinoxes and solstices take place everywhere at the same time. I would assume as well that the Chinese calendar refers to the northern hemisphere and the Mayan to the southern. The Tropic of Capricorn at 23½°S latitude is the furthest south that the Sun can be overhead so that it will never be quite overhead from Brisbane at 27½°S latitude. The Sun was at its highest from Brisbane as from everywhere else in the southern hemispher at 12 noon Eastern Standard Time at the solstice on 21 December 2008.

Submitted by Nick Lomb on 2008/11/22 at 1:18 pm
Hello Cheryl. The longest day each year is the day on which the summer solstice occurs, that is the time at which the Sun appears at its furthest south for the year. That always takes place around 22 December. There is no special astronomical significance to 22 January, however, the hottest days of the year tend to be a few weeks after the summer solstice, somewhere around the middle of January.

Submitted by Cheryl on 2008/11/21 at 4:53 pm
Hi Nick
I am a little confused as I was always told the longest day was on January 21-22 of the year. In a discussion with a friend last night it was mentioned that it was 22nd December or thereabouts. On looking up this site is state summer solstice is on 22nd December. Is there a difference between summer solstic and longest day or is there some other happening on or about 22nd January.

Submitted by Nick Lomb on 2008/10/13 at 10:53 am
Hello Karen. Summer solstice in 2008 will be on Sunday 21 December at 10:04 pm in Australian Eastern Standard Time. This is the time applicable in Queensland. At the summer solstice the Sun is at its highest in the sky and so the maximum amount of solar radiation is reaching the ground. This solar radiation is measurable as watts per square metre. The build up of energy is gradual and then after solstice it slowly reduces reaching a minimum six months later at the winter solstice. There is no other type of energy build up.

Submitted by Karen Green on 2008/10/11 at 9:17 am
Hi Nick
I don’t want to go on about the Summer Solstice however I need to know the exact time the Summer Solstice will be in QLD 2008. As we do not have Daylight Savings here the time will be – 11.04? I need to know as I write a column in a magazine and we will be doing a celebration heralding in the solstice. What I have been told is that there is a build up of energy before the Solstice actually occurs. This new energy moves over 3 days with the pinnacle at the time the solstice occurs. Can you comment on this? Thanks for your help, it is much appreciated. Regards Karen

Submitted by Nick Lomb on 2008/10/07 at 11:50 am
Hello Alison. In the Southern Hemisphere the Sun is at its highest in December at the summer solstice. In 2008 that occurs on 21 December. The Tropic of Capricorn denotes the latitude of 23° 26′ at which the Sun is directly overhead at midday on the solstice. Queensland, Northern Territory and Western Australia are all crossed by that latitude. In particular, the Tropic of Capricorn passes just outside Rockhampton in Queensland. I hope that this information is of assistance.

Submitted by Alison Wright on 2008/10/02 at 5:32 pm
Hi Nick
I hope I am not asking something you have already covered. I am looking for something that will tell me when the sun is directly overhead (seasonally, not midday). Like my moonphase calendar, I am hoping to log in date and coordinates and get a result.
I enjoy a very limited understanding of the how the earth travels, and astronomy. This, coupled with a good sense of direction and an interest in birdwatching, often informs the daily experience of my world with a little extra understanding and enjoyment. Thanks

Submitted by Sue on 2008/06/22 at 7:42 pm
Hello Nick,
Many thanks for your info. I have put some of it in a PowerPoint for my students’ Science lesson tomorrow. As we have just had a winter solstice I thought it was a golden opportunity to mention it to Year 5 and 6 students while they notice how dark it gets. The images are great. I hope you don’t mind. Your name and site will be cited.
Cheers, Sue

Submitted by Reg Baker on 2007/12/23 at 7:18 am
I always noted on the ABC weather report the sunrise and sunset and on the purported day of the solstice it was not the longest day and also that the equinox that the day was not 12:00:00 but a few minutes out. Eventually I found out that the latter was in due part to the definition of sunrise and sunset – ergo the difference made by adding the traverse of the sun’s diameter. This report seems to add another factor to these observable mysteries.

31 responses to “The longest day or the summer solstice”