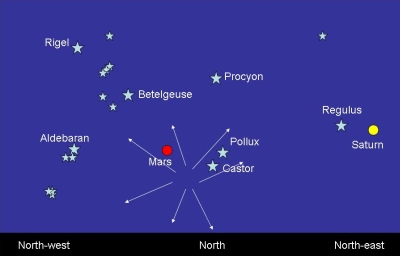 On Friday evening late until dawn on Saturday morning we expect one of the best meteor showers of the year – the Geminids.

What is a meteor shower?

As a comet approaches the Sun, the intensity of solar radiation blows off dusty particles from the surface of the dirty snowball at its centre. These particles form the head of the comet or coma as well as its long tail. Some of the particles disperse, but over many years some spread out over the path of the comet around the Sun. The Earth periodically runs into these meteor streams and as these burn up high in the atmosphere we see a meteor shower.

Why do the meteors appear to come from the one spot “the radiant” in the sky?

As the Earth passes through one of these streams all the particles appear to be moving in the same direction – a combination of the actual movement of the particles and that of the Earth. What we see in the sky is then like looking along a railway track with the different particles all appearing to come from the one spot in the sky.

From which comet do the Geminid meteors come?

Every rule has its exceptions and the Geminids is the exception in the case of meteor showers. The parent body for the dispersed dust particles is not a comet but an asteroid or space rock called 3200 Phaeton. Though some scientists speculate that 3200 Phaeton is the remnant of a dead comet, we will be unsure until future astronauts inspect it close-up.

How and when should you watch the Geminids?

Try to watch them from a dark spot as far from bright city lights as possible. You can start watching from late on Friday evening 14 December 2007 and continue until dawn on the Saturday morning 15 December 2007. This year we are fortunate that there will be no Moon visible to brighten the sky. Plus for those in Australia the predicted timing is good – the shower is expected to peak before dawn at about 3:45 am Eastern Australian summer time. Note that the meteors can appear anywhere in the sky, but if it is a Geminid, you should be able to mentally trace the path back to the radiant low in the north.

17 responses to “The Geminids are coming!”