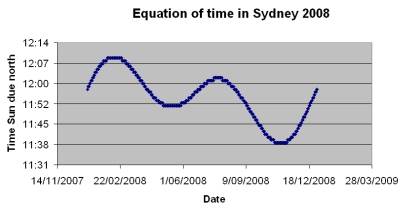 The equation of time calculated for 2008, drawn by Nick Lomb

In this morning’s Column 8 in the Sydney Morning Herald, David Kerr of Hornsby reports that on the three dates bracketing August 15 this year the times of sunrise and set are symmetric with respect to 12 noon. In other words on those dates the Sun is due north and at its highest point at 12 noon. Mr Kerr is quite correct, so hopefully he was using the 2007 Australian Sky Guide for his sunrise and set times!

On most days during the year the Sun is not due north at 12 noon, but either early or late. This is represented by the equation of time, which is a combination of the effects of the tilt of the Earth’s axis and the oval-shape of its path around the Sun. If you have a look at a sundial that usually has an engraved table of values from the equation of time so that sundial time can be corrected to ordinary standard time.

There is a further complication. To actually use the equation of time we have to allow for our longitude or specifically the difference between our longitude and the meridian on which our time zone is based. In Sydney for example the longitude is 151°12′ which is 1°12′ greater than the 150° longitude on which eastern standard time is based. Hence the Sun is due north always 4 minutes and 48 seconds earlier than at the standard meridian.

As can be seen on the above graphical representation there are four days during the year when the Sun is due north exactly at 12 noon EST in Sydney: 5 January, 30 March, 9 July and 15 August.

David Kerr asked what those days should be called and suggests “middle noon” or “equiday”? I am not sure about either of those. Any suggestions?

12 responses to “Sunrise and set and the equation of time”