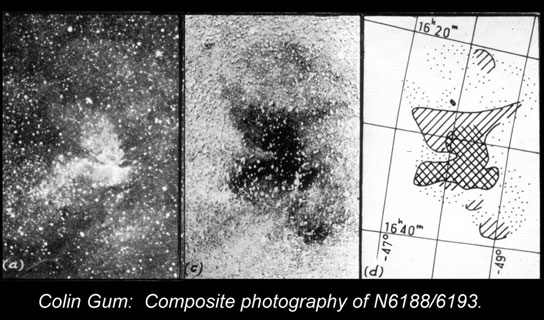 Moon observer extraordinaire and member of the Sydney City Skywatchers, Harry Roberts, sends the following article about a well remembered Australian astronomer who achieved much in a short life and career. He had been appointed as head of the optical astronomy department at Sydney University the year before he died. His final trip to Europe was to arrange for 90-cm telescope for the University, the plans for which lapsed after his death. When your humble blogger joined the department as a student some years later it would have been wonderful to have had access to such a telescope:

Some lucky “Aussies” are commemorated by craters on the Moon, and in an earlier article I discussed crater Tebbutt, named after the colonial era astronomer John Tebbutt who lived and worked at Windsor (NSW) and was first President of the BAA (NSW). Tebbutt was an amateur astronomer.

Colin Gum, by contrast, was an Australian professional astronomer based at Mt Stromlo in the 1950’s, and in addition to a fairly minor lunar crater, Gum has the largest emission nebula in the whole sky named after him!

Gum was an innovator in the photographic technique of image superimposition. I first came across his work in a small text called “Astronomical Photography” by de Vaucouleurs in the 1960’s. The book had photos of the NGC 6188 region and the mysterious planetary or “cocoon” object NGC 6164-6165, located on the border of Ara and Norma (Fig 1). Gum showed how it was possible to superimpose a positive and negative image of the same field, where one image contained H-alpha data and the other contained none. Superimposition of the two plates resulted in the stellar images cancelling each other and the H-alpha regions then showed as dark objects against a grey background. Gum’s instrument was a 4” Schmidt camera. With this modest gear he discovered the gigantic H-alpha emission region that now bears his name, the Gum Nebula (Gum 12) in 1954, as well as other H-alpha regions. Those were the days! Sadly, Gum had a short career that ended with his death in 1960, aged 36 (skiing in Switzerland). 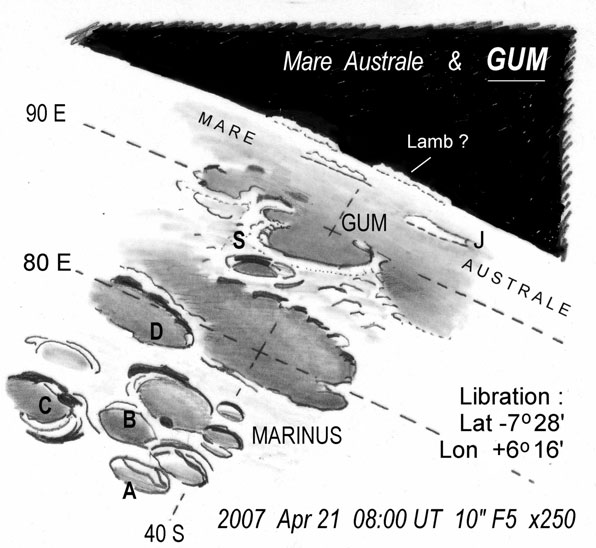 Appropriately enough crater Gum is located in the southern seas of Mare Australe as shown on the above drawing. Since Gum is sited about 90ºE longitude it sits right on the Moon’s east limb and needs good libration of say +6º for a reasonable view; it’s a tricky object to observe.

Mare Australe is an ancient low region of the Moon that is well covered with impact craters, many of which have been partly submerged by lava flows. Like well-known Sinus Iridum, crater Gum lies on the edge of raised terrain with much of its east rim submerged in the dark Mare lava, and straddling the 40ºS line of latitude. Gum is clearly an ancient formation and has a secondary crater rim, also submerged, on its north edge. Gum stands out brightly against the dark Mare lava flows. On its west side, secondary Gum S looks deep and fresh.

Also on the 40ºS line to the west is the Marinus complex of craters. These look distinctive and are a good pointer to Gum, as the Marinus group can be seen under most librations. A large patch of dark lava between Gum and Marinus is part of Mare Australe, and seems to have no name.

Between Gum and the Moon’s east limb several bright landforms could be seen; one was young crater Jenner, labelled J in the sketch. If we could see into Jenner we would find it had a remarkably dark floor. On the lunar horizon two raised areas like mountain chains are perhaps the raised rims of crater Lamb and others.

Not far from Gum in the “South Sea” is Brisbane (out of the Fig). Though not born here, Thomas Brisbane has strong links to early Australian astronomy, and I may stretch the definition of who’s an Aussie to discuss him in a future piece.

Until then, enjoy Moon watching.

2 responses to “Aussies on the Moon: Colin Gum”