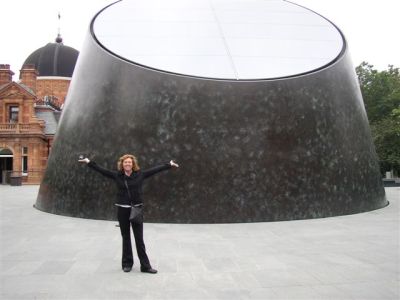 The new planetarium officially known as the Peter Harrison Planetarium at Greenwich Observatory together with new exhibits opened to the public on Friday 25 May 2007. Sydney Observatory’s esteemed London representative Toner Stevenson was there on the following day and sent the following enthusiastic report:

Two important events happened in Greenwich, London, this week. The first, Mon 21 May, was a sad day with the destruction of the historic Cutty Sark, the last remaining tea clipper in the world. The second, Wednesday 23 May, bought a day of celebration with a major new planetarium opened at the historic Royal Observatory, the home of Greenwich Mean Time and many major astronomy discoveries since 1675. 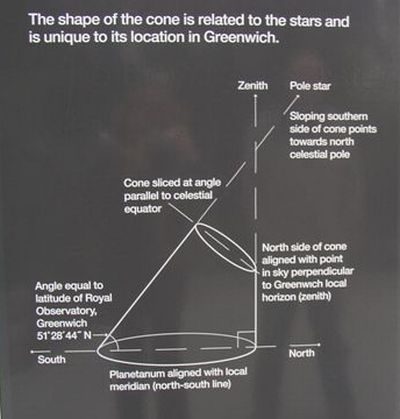 Explanation of the truncated cone shape of the Greenwich Planetarium, courtesy Toner Stevenson

The new planetarium is part of a spectacular refurbishment of the historic site and the construction of a brave new structure, partially underground, to house the planetarium. A bronze cone rises out of the ground, its shape, markings and alignment relating to the stars and Greenwich’s location on the globe. Underneath, the Peter Harrison Planetarium (named after the principal benefactor and not a relation of John Harrison of longitude fame) has been built with lie-back first-class seats to accommodate 120 people. Today Dr. Clare Thomas, one of the astronomers, presented Star Life, a visually stunning juxtaposition of real images from the Hubble Space Telescope, the Very Large Telescope and graphic modeling projected utilising state-of the-art Evans and Sutherland Digistar 3 technology onto the planetarium dome. Afterwards I visited the highly interactive exhibition about the universe, space exploration and the types of tools astronomers use to search for answers, particularly enjoying the role-play Mission Control game designed for young and young at heart. 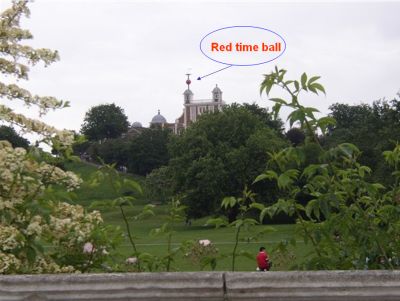 Greenwich Observatory with the time ball half way up its post while being raised just before 1 pm, courtesy Toner Stevenson

The historic Observatory, designed by Christopher Wren, is now more popular than ever. History lives on with the timeball dropping at 1pm (the same as Sydney Observatory) and the collection, buildings and ‘Home of Time’ garden make it highly sensitive, however, this new development, the first major change in 200 years, makes it able to accommodate a modern view of astronomy and the story of Time measurement.

2 responses to “The new planetarium at Greenwich”