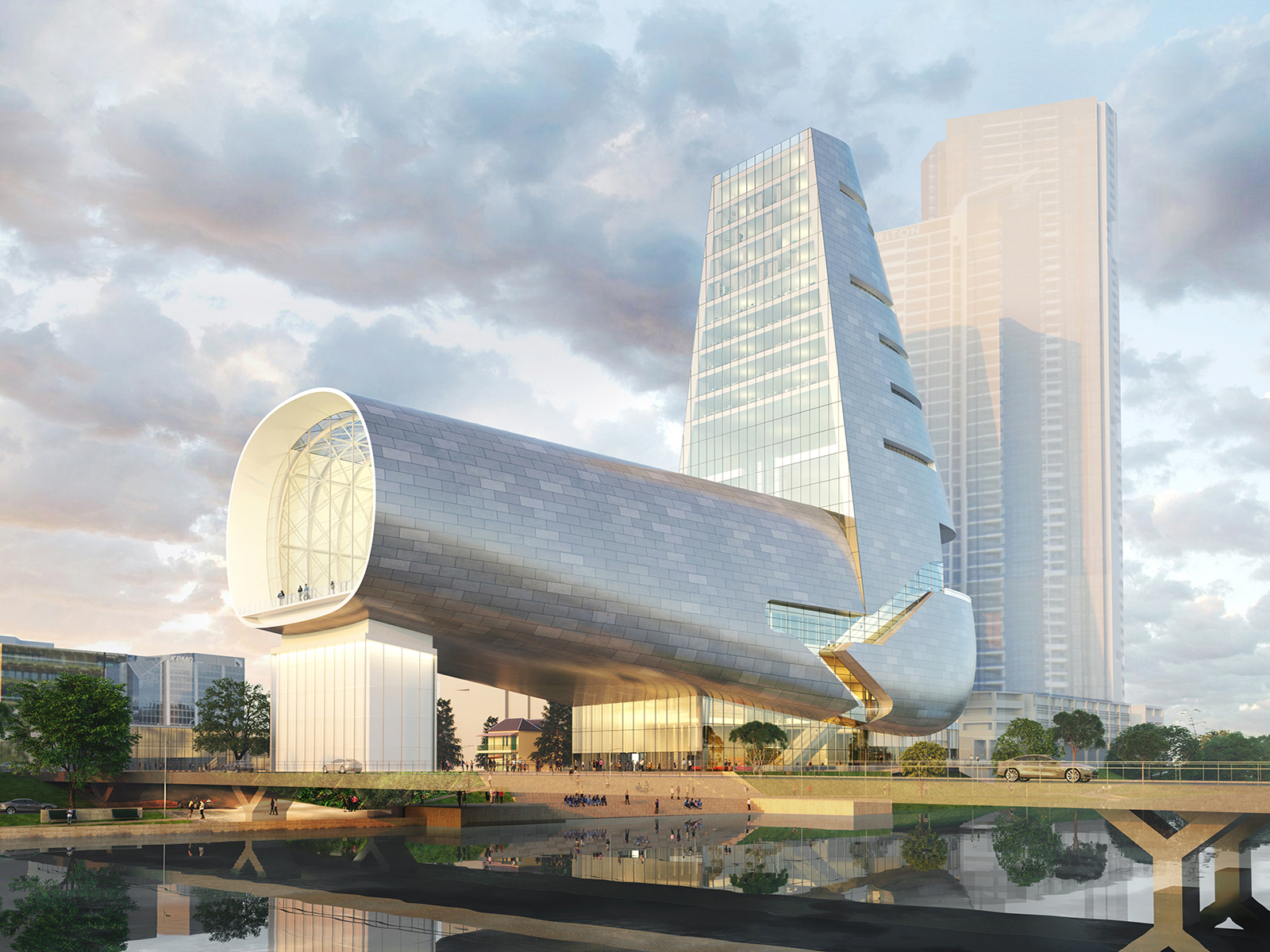 We envision an anthropological vessel ‘touching the earth lightly’, combining state-of-the-art technology, maximum flexibility and large spaces with exposed structure and circulation. The main presentation space has an expressed structure inspired by the Mandjabu; beautiful anthropomorphic traps made by Aboriginal peoples. We acknowledge the complex understanding of the cosmos that Indigenous people established. Our homage to their skills and knowledge is represented in the tower form tilted at 23½ degrees, same as the earth’s axis. Reflected in the Parramatta River, this tilt is reversed linking the sky to the earth. Our zinc façades (analogy to eels’ scales of the Parramatta River) are carved expressing escalators and to provide spectacular views out. A River Square links the city to the river. This generous public space will host events for 10,000 visitors, and will be designed with full engagement and appreciation of the aspirations of Indigenous artists and custodians to tell the history of Parramatta. This iconic museum carefully balances scientific optimism, high technology, and the spiritual and natural values of Aboriginal Culture.

The Jury praised the courage and ambition of the team’s design, which offered a unique and distinctive response to the design brief. The philosophy behind the team’s design approach was appreciated by the Jury. The key objectives of maximising public space, aiming to achieve net zero emissions, and concentrating the museum functions were considered to be excellent starting points for the design. The Jury praised the scheme’s generosity in its provision of public realm, achieved by lifting the building off the ground plane. The resultant public plaza had the potential to be a positive place for civic events and public use. However, the lack of shading on the site was a concern, raising some potential issues for environmental control. The Jury appreciated the circulation and intuitive wayfinding in the building, which was clear and legible and provided an equal experience for all users. Whilst the underlying design approach was admired, the Jury considered that the resultant building was ultimately incompatible with the site and the requirements for the Powerhouse in Parramatta. The height and scale of the building, whilst considered to be in-keeping with the general future direction of the Parramatta cityscape, was too dominant within the site and its context.

The Jury had questions about the internal nature of the building. The lack of interaction with the outside environment created a sealed, claustrophobic experience, with few moments for visitor relief. The Jury also raised concerns about the integration of public art throughout the scheme. This element was dominant throughout the submission and had a significant impact on the design. This approach was in direct contradiction to the requirements of the brief, which noted that there was no requirement for public art at this stage of the project. The Jury noted that the team’s understanding of Indigenous communities appeared to be limited. This was demonstrated in the repeated references to the Indigenous concept of ‘touch the ground lightly’. The Jury noted that this concept concerned sustainability and taking as little from the earth as possible, as opposed to the team’s interpretation of limiting the physical placement of buildings on the ground. The reference to the Mandjabu fish traps was also considered inappropriate and not applicable to the local Parramatta context.

The retention of the heritage buildings was appreciated as a gesture towards the site’s history and a point of engagement with local stakeholders. Whilst the Jury noted that this had the potential to create a diversity of architecture within the public realm, the deeper rationale had not been properly considered or articulated within the submission or presentation. The proposed use of these buildings as food and beverage facilities did not seem compatible with any potential argument for retention. The juxtaposition of the very large museum building and the smaller heritage structures was also considered jarring. The result of retaining Willow Grove was considered particularly problematic, as the building interrupts the Civic Link, blocking the direct connection of the city and the river.