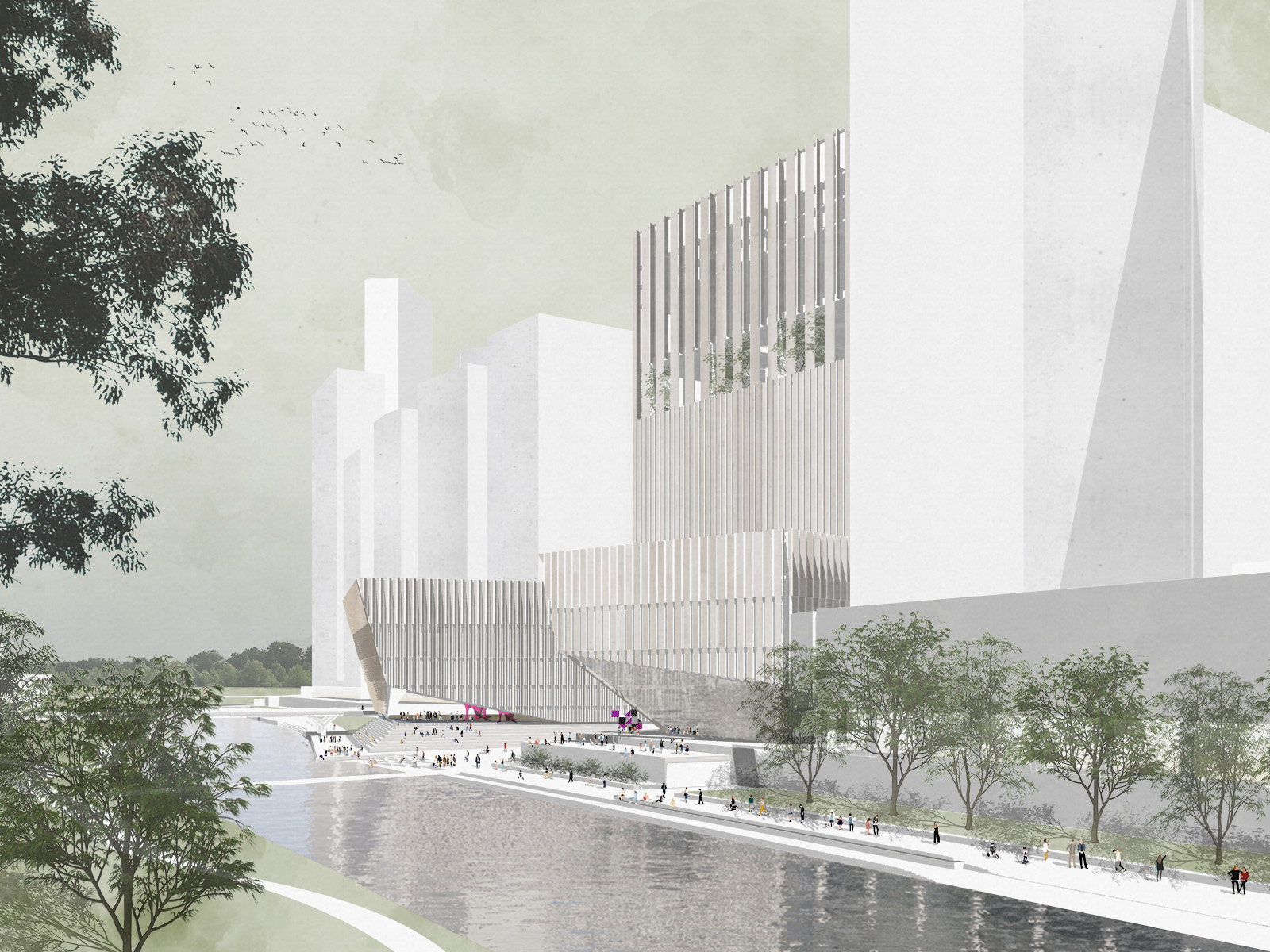 What can this project be for the Powerhouse and Parramatta? The long-term, holistic lens of Indigenous wisdom simultaneously acknowledges past, present and future. By viewing the trajectory of both the Powerhouse and Parramatta through this lens, we have been able to imagine a museum unlike any other. A generous public realm acts as the lobby to a porous precinct of museum buildings, which carefully knit the riverfront back into the growing city of Parramatta. The site provides the perfect stage to experience a diverse range of exhibitions, or to simply pause and enjoy the riverfront setting. We’ve imagined the museum precinct becoming the central focal point to the whole Parramatta riverfront, establishing precedence for how the future city might meet the river across this frontage. Our vision intertwines the qualities of the new museum and river, celebrating and elevating the experience of the place as a whole. Quiet structures of immense scale appear to lean toward each other playfully, drawing visitors in from the city. Giant apertures in the buildings frame city and river views and transport visitors through to the world of wonder within. A series of dynamic urban spaces culminate at the River Square, a city scale event space that metaphorically pulls the river into the city. The Powerhouse Parramatta is a leap in the evolution of museums, one that feeds the life of the city into the museum, and the life of the museum into the city.

The Jury was impressed with the team’s professional presentation, which clarified the details of their proposal. The design proposal demonstrated a bold approach to the distribution of museum functions. The breaking down of the program across the three buildings was an interesting, if risky, proposition; necessarily this created problems with circulation and the connectivity of the different programmatic functions. The museum became defined as three separate buildings as opposed to an integrated site. The Jury also considered that the interstitial spaces between each of these three buildings required further refinement and thought.

Nonetheless, the Jury responded well to the proposal’s integration with the Parramatta cityscape; the tower blended well into the surroundings, and freed up space on the river front, allowing the site to breathe. However, the high-rise nature of the design introduced vertical circulation problems. The Jury observed that it would be very challenging to encourage visitors to rise up through the buildings, and there was a risk the tower would not be read as part of the museum, causing visitors to miss out on an essential part of the experience. The Jury was impressed by the thinking behind the decision to extend the Civic Link, but raised concerns over the narrowness of the connection – with high-rise buildings on either side, this suffered from a lack of public space and was not perceived as an inviting pathway. The landscape concept appeared to be less resolved and was not fully integrated into the design. Overall, there was a lack of green space, planting and shading, and an over-reliance on water elements to provide environmental protection. The extensive amount of hardscaping was problematic considering the local climate in Parramatta – the heat sink effect being particularly apparent – and the Jury noted the lack of soft scaping to provide respite.

The Jury also raised concerns about the proposition to build a basement in the flood plane; this would be susceptible to the 1-in-100-year flood event. The Jury raised concerns about the integration of art within the design. Whilst the thought and inspiration behind this was appreciated, the vision was very singular, expressing one artist’s perspective, and lacked engagement with the local communities. This was in direct contradiction to the way the Powerhouse Parramatta engages with artists and Indigenous communities. As a very particular expression, there were also concerns about how this would age over time. The Jury thought that the form of the building was less well suited to the specifics of the Parramatta climate − the buildings were self-contained and not generous in the blurring of indoor and outdoor space. The Jury noted that this structure may have more potential for a setting in a colder climate.