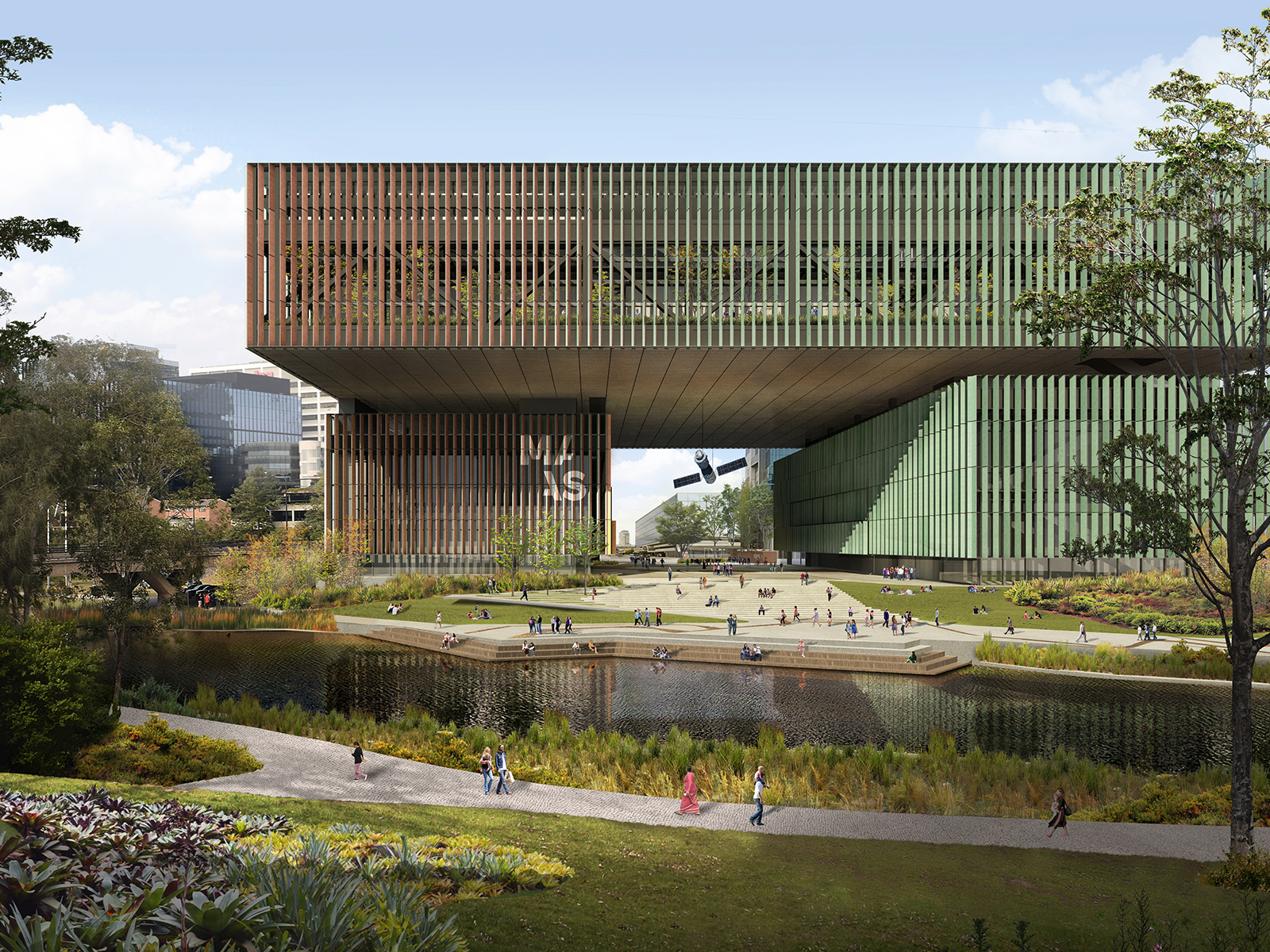 The strategy for the Powerhouse Parramatta site capitalises on a prime opportunity to activate the public domain at multiple scales. At the human scale, we respond to the public’s experience of the Powerhouse building against the backdrop of burgeoning high-rise residential towers. Our design anchors the precinct with a building that is fine-grained, approachable and porous. At the urban scale, its iconic presence is instantly recognisable as a meeting place. This cultural drawcard is gateway for Powerhouse Parramatta, activating the urban fabric at the heart of the revitalisation of the Parramatta riverfront. The Powerhouse Parramatta will set a benchmark for sustainable design and development, while providing an internationally recognised cultural institution for the Sydney. It recognises the site as the riverfront’s most public gateway, where the future ‘Civic Link’ will meet the river’s edge. The building addresses this with a landmark public building that despite its large scale, is highly legible at the human scale.

The Jury considered the proposal to be an elegant and simple design, particularly with regard to its functional and operational solutions. The design presented a coherent and developed landscape approach, influenced by collaborator Burle Marx and inspired by a distinctively Brazilian approach to public space in cultural institutions. This was manifested in the design through the large ‘void’ under the museum given over to public space, and the patterned landscape approach which extended across the site into the building. The Jury praised the team’s application of these Brazilian-influenced approaches to landscape; however, there was some scepticism about their applicability, given the Australian, and in particular, the Parramatta climate.

The Jury appreciated the gesture of the large public space on the ground plane – this was seen as a positive response to Parramatta’s challenging climate and the heat sink effect. However, the Jury had some practical concerns over the vast size of this area and the challenges this would pose with programming and activation. They were not persuaded that the scheme could bear sustained wind and weather exposure, as parts of this area were entirely unprotected. By contrast, the operational side of the design was considered to be very strong. The generous allowance for back-of-house spaces, and the efficient and consistent layout, was appreciated; though, it did not escape the Jury’s attention that the area provision for these spaces was far in excess of the brief requirements.

The circulation throughout the museum worked well – the building was legible and navigable. The Jury appreciated the shifts between regular spaces and less rigid spaces – this provided welcome variety in the visitor experience and ways of moving people. The Jury recognised the façade concept was a strong, distinctive element of the overall scheme, but there were concerns that it might be experienced as homogenous and, indeed, relentless. Although the team presented this as the unifying factor across the design, in the Jury’s eyes this lacked finesse and variety. The façade was not conceived in response to the site, and the design lacked specific inspirations that related to the site, its culture and people. Crucially, it failed to convey a sense of Parramatta’s DNA.

The Jury observed that the proposal had some gestures towards understanding and engaging with Indigenous communities, but noted that this needed further development. Overall, the curatorial program for the Powerhouse in Parramatta had not been fully explored or assimilated in the design. The placement of gardens next to the exhibition spaces presented some practical problems for the Collection in terms of conservation and maintenance. The Jury considered the team to be articulate, highly engaged, and flexible. They presented well and responded to questions in a thoughtful and open manner. Overall, however, the Jury’s assessment was that the design lacked a depth and richness that might have come from addressing the specifics of the site and understanding the local culture better.