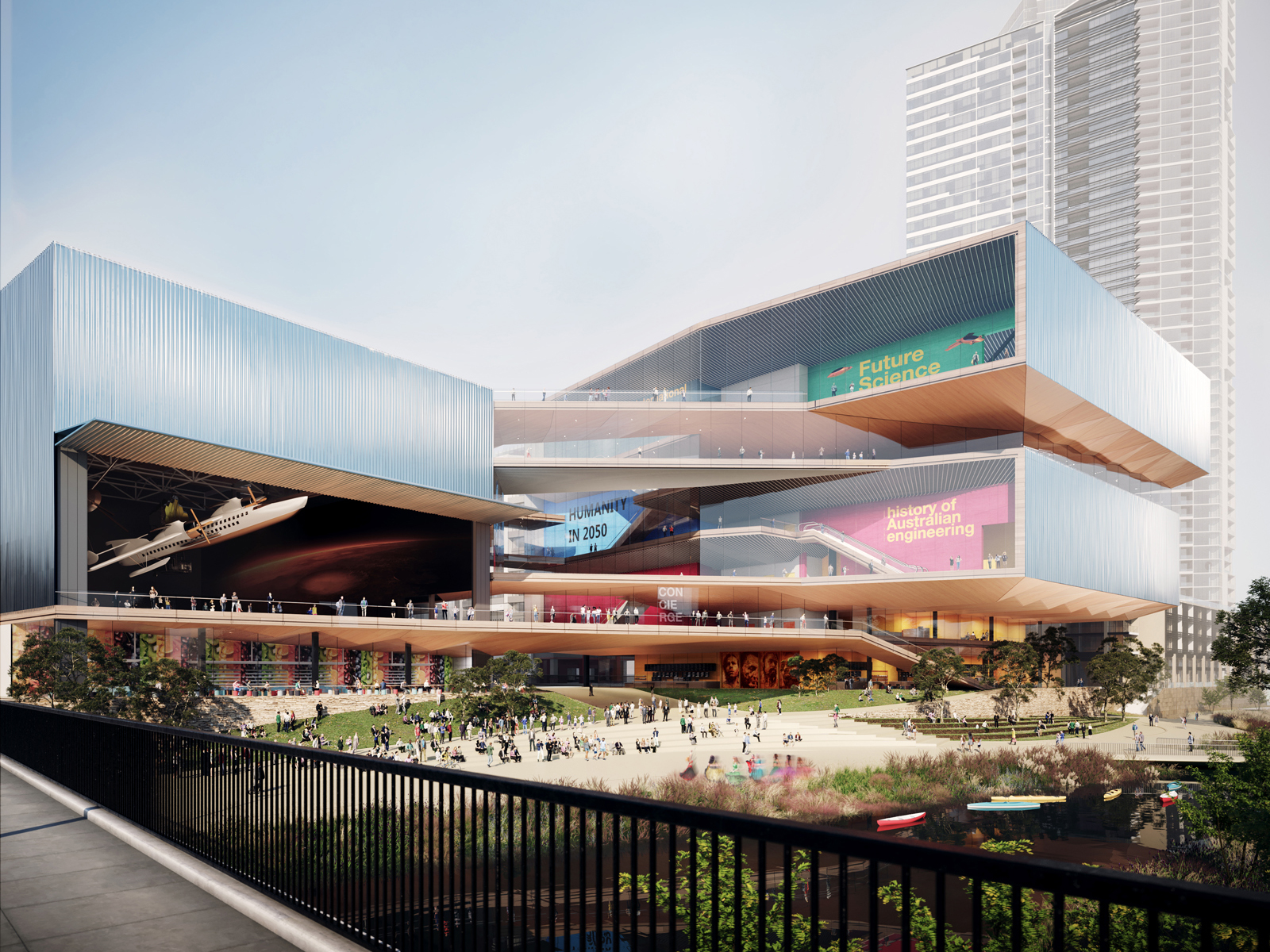 We want Powerhouse Parramatta to be as alive and vibrant as the Lanes on a festival day and as full of energy and anticipation as an Eels match. That is why we are putting public spaces first — making the river bank a place of convening, letting the city flow below the buildings and up into the museum, creating laneways in the sky. Country is expressed through the materials of the building. The milky white façade reflects the weather and ripples like the river. The stringybark timber soffits, triangulated in form, reference the traditional Nowi canoe and make the precinct a warm and inviting place to be. When the galleries are closed, the Powerhouse remains open. Even if you are just passing through, when you look up, you can still glimpse the exhibits through the transparent glass walls. Because this is a museum without borders and you never have to open a door to be a part of it. Our team, led by AL_A and Architectus, with Arup, Gross.Max., Balarinji, Yerrabingin and Arcadia, have come together to imagine an exceptional piece of city. We all share a desire to work with the people and the landscape of Parramatta to realise a place that will be sensitive, inviting and innovative.

The Jury considered the design proposal to be a positive response to the landscape with exceptional connectivity to the water. The scheme presented clear potential to reinvent the river experience, naturalising the riverbank and linking the city and river to make a new civic connection from Parramatta Station to the water. The Jury appreciated the key design approach of using the Powerhouse in Parramatta to elevate the Civic Link, lifting the museum off the ground plane and leaving an open public space below, activated by retail and food and beverage facilities. This had the added benefit of lifting the exhibition spaces out of the flood risk zone. The Jury responded well to the organisation and distribution of the Presentation Spaces: the staggered approach allowing for excellent connectivity between the spaces. This contributed to a strong sense of pedestrian movement upwards and throughout the building. The Jury also praised the drama and presence of Presentation Space One.

Despite the approach’s merits, however, the Jury noted some operational concerns with the suggested layout. These included the location of the back-of-house functions in the centre of the exhibition block, which had the potential to cause conflicts and operational challenges during the installation and take-down of exhibitions. Additionally, the Jury raised concerns regarding the overall circulation around the building – this appeared overly complex and resulted in several blocked routes and dead-end passages. The large amount of back-of-house space facing onto the Civic Link was also problematic.

The proposed façade was appraised as beautiful and poetic; however, the Jury was apprehensive about the practicalities. The outer layer was essentially decorative with no structural or practical function – a cladding for a concrete container. This solid layer between the façade and the museum interior precluded the possibility of using the façade to filter daylight inwards and created a sealed box lacking ‘breathing space’. Despite its beauty, the façade dominated the design proposition, necessitating a substantial amount of heavy structure and loading capacity and closing off other design choices.

The Jury was also apprehensive about the design’s environmental strategy – the large expanses of glass façade and the building’s orientation exposed the building to solar heat gain, and limited shading was provided to mitigate this. The Jury expressed reservations regarding the integration of the building with the city. The scheme focused heavily on the central space, which meant the outer perimeter was unsatisfactory in its resolution; it projected huge expanses of blank façade to the city side approaches.

The eastern elevation appeared to have been neglected in favour of the approach from the future ferry terminal. The placement of the concierge on an upper level was considered problematic for the entry sequence, which appeared confused from certain approaches. The stairs and lifts were located in different areas, meaning the quality of visitor experience would not be equal for all. The Jury praised the team’s presentation and were confident in their ability to deliver a project of this size and significance. The collaboration was strong and the chemistry between the partners was convincing.