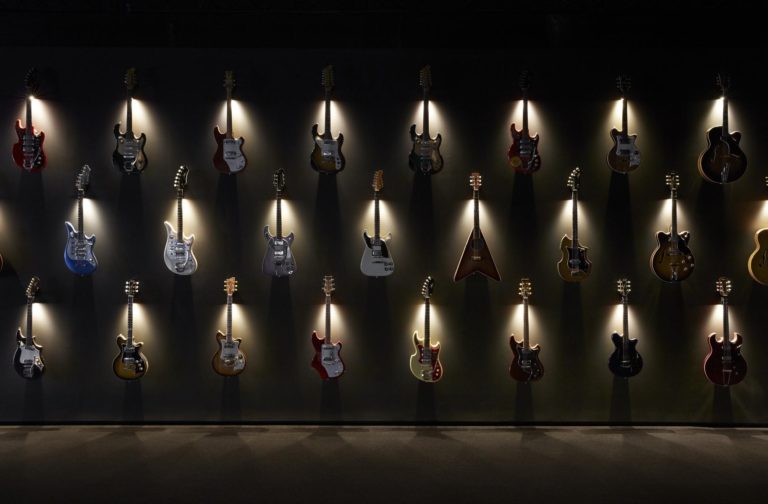 The Powerhouse today unveiled Maton: Australia’s Guitar, an exhibition of the largest retrospective of Australia’s leading guitar manufacturer Maton, opening to the public on Saturday 25 July 2020.

Maton was also the first manufacturer to use Australian wood species in guitars on a large scale, with the models predominantly created from Queensland Maple, Bunya (Queensland) and Victorian Blackwood (Victoria), considered worldwide to be more sustainable than traditional timbers. Bill May’s importance to the history of Australian music was recently recognised at the Australian Music Association Awards, where he was posthumously awarded their highest honour and inducted into the hall of fame. Now operated by May’s daughter and son-in-law Linda and Neville Kitchen, the company is Australia’s largest manufacturer of guitars producing over 8000 a year.

In this first major survey, over 130 guitars will traverse the history of Maton, drawing on more than 70 years of music. Maton: Australia’s Guitar will explore the company’s beginning, its first models and influence on the music scene transcending through genres such as Country and Western, Folk and Classical, Rock and Roll, and Jazz. A highlight on display from the Powerhouse’s collection is The Easybeats’ guitarist Harry Vanda’s Maton guitar which he used to write the song ‘Friday on My Mind’. Also on display is Tommy Emmanuel’s first Maton, a Maton electric Mastersound MS500M and hand painted case; the first guitar Bill May made as a teenager; some of the rarest Australian guitars ever displayed, and instruments and amplifiers used in the heyday of Australian jazz, folk, rock and country. The instruments interact with a light show and original music score, written for the exhibition by composer Nick Wales and DJ Johnny Seymour, and performed by a string of musicians on instruments from this collection.

This stunning and thorough collection of Maton guitars, ukuleles, lap steels and amplifiers are part of the personal collection of Bankstown-based instrument collector Wadih Hanna. A guitar player since he was a young teen, his wife Lucy gifted Hanna a Maton acoustic guitar for their engagement, and both a marriage and an obsession followed. The Powerhouse reopened to the public with free timed entry admission on 1 June 2020. Maton: Australia’s Guitar, is the first new major exhibition to launch following the reopening.

Lisa Havilah, Powerhouse Chief Executive said: “Maton is an integral component in the development of Australian music both nationally and across the world. At the Powerhouse, we are committed to communicating the history of our cultural and scientific heritage to our visitors and we are thrilled to be able to tell the success story of this homegrown manufacturer.”

Linda Kitchen, Director of Maton and daughter of Founder Bill May: “Neville and I took over the Maton company from my parents, Bill and Vera May back in 1986 and we are very proud of our involvement. Over the last 40 years there have been changes and challenges like any business, but the main constant has been and remains our unabated focus on maintaining our high levels of quality and workmanship. I very much look forward to seeing the exhibition, including Wadih’s significant collection, and we’re extremely grateful to Powerhouse for creating an opportunity to share the Maton story with the broader community.”