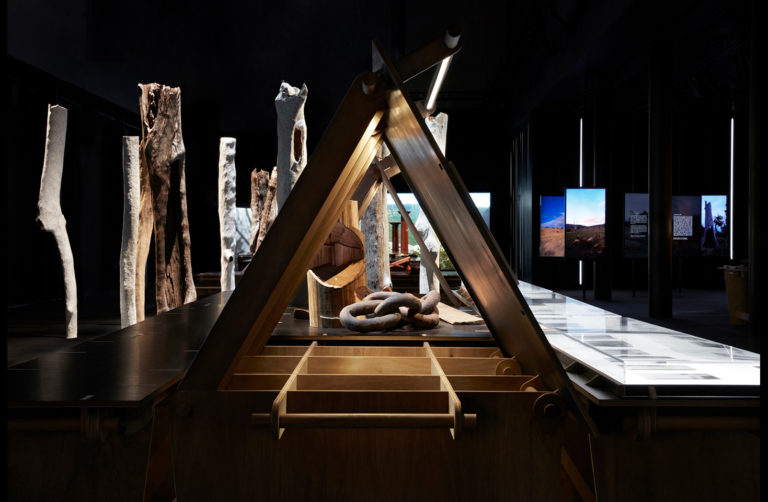 Opening exhibitions include Eucalyptusdom, a major exhibition reckoning with our cultural history and ever-changing relationship with the gum tree. The exhibition presents over 400 objects from the Powerhouse Collection alongside 17 newly commissioned works by creative practitioners working across the fields of design, architecture, film, applied arts and performance. Taking its title from a 1930s text by Edward F Swain, one of Australia’s earliest conservationists, Eucalyptusdom also reveals the Powerhouse Museum’s unique and longstanding relationship with the eucalypt.

Robert Rosen: Glitterati, the largest survey of the work of one of Australia’s foremost fashion and social photographers, will traverse Rosen’s expansive back catalogue documenting four decades of glittering parties, concerts, fashion events and nightclubs across Australia, London and Europe.

Electric Keys will survey the journey of electric keyboards and the instrument’s contribution to music, presenting mechanical instruments dating from the 17th Century alongside the Museum’s recently-acquired collection of mid-20th century models and a collection of significant synthesisers.

Clay Dynasty will chart 50 years of studio ceramic practice in Australia with over 400 works from 160 Australian artists. The exhibition will be the first to open in the Museum’s reimagined Turbine Hall.

Lisa Havilah, Powerhouse Chief Executive said: “The Powerhouse is thrilled to be able to welcome visitors back to the museum. To celebrate this moment, we will be unveiling five new exhibitions, the first step in the vision for a reimagined Powerhouse.”

Over four decades, Robert Rosen attended glittering parties, concerts, fashion events and nightclubs across Australia, London and Europe, capturing the rich, famous and fabulous for the fashion and social pages of an array of newspapers and magazines. Defying the perceived image of the pushy, intrusive paparazzi, his polite and discrete approach earned him the respect and trust of his subjects. Carrying two or three cameras around his neck, with a glass of champagne in hand, he became a fixture in the social scene and captured intimate portraits that conveyed the mood and energy of the times.

Glitterati will present over 974 photographs and will include images from Rosen’s early career in London and Paris capturing the fashion shows of iconic designers like Yves Saint Laurent, Claude Montana and Zandra Rhodes. In Australia Rosen brought a new perspective to the fashion pages with his backstage photos at Australian Fashion Week and documented celebrities, politicians and entertainers at parties, openings, launches and events from the exclusive Cointreau Ball to the ARIA Awards. He collaborated with those at the centre of creative culture during iconic moments and documented an eclectic mix of international and Australian celebrities. These include Paul McCartney, Bryan Ferry CBE, Elle McPherson, Peter Morrissey, Divine, Paul Capsis, Nina Simone, Boy George, Yves Saint Laurent, Andy Warhol, Grace Jones, Kylie Minogue, Nicole Kidman, Luciano Pavarotti, Lady Sonia McMahon, Elton John and Michael Hutchence.

Electric Keys will showcase over 20 keyboards from the Powerhouse collection, surveying the journey of electric keyboards and the instrument’s contribution to music. Mechanical instruments dating from the 17th Century will be presented alongside the Museum’s recently-acquired collection of mid-20th century models and a collection of significant synthesisers to explore modern keyboard development and its influence on the genres of soul jazz, blues, funk, rock, progressive rock to pop and hip-hop. Highlight objects on display include the Powerhouse’s oldest instrument, a Virginal plucked string keyboard with a compass of 4 octaves made in Italy in 1629; a 1974 electric piano ‘Wurlitzer 200A’, as heard performed by the Queen bassist John Deacon in You’re My Best Friend; and a 1982, Roland SH-101 monophonic synthesizer, producing the iconic baseline in Sweet Dreams by the 1980 pop duo Eurythmics (Annie Lennox and Dave Stewart).

Surveying over 50 years of practice as shaped by three generations of makers, the exhibition features works by pioneer potters who profoundly changed the course of Australian studio ceramics in the 1960s. Led by the English potter Bernard Leach’s interest in pre-industrial ceramic traditions of Europe and East Asia, they made uniquely Australian objects by using local materials and responding to the Australian environment. Objects from the 1970s will illustrate the impact of American Funk art movement and popular culture in Australia, while works from the 1980s will reveal how Australian artists explored the vessel tradition through postmodern forms, colours and patterns.

Highlights from the Museum’s collection include ground-breaking works by Marea Gazzard AM, Gwyn Hanssen Pigott OAM, Margaret Dodd, Joan Grounds and a rare collection of the pottery made by Indigenous Australian artists in 1968–74 at the Bagot Pottery in Darwin, Northern Territory.

The Powerhouse reopens in line with the latest NSW Government’s public health guidelines and has implemented a number of safety protocols to keep visitors safe during COVID-19. All staff, and visitors to the Powerhouse aged over 16, will be required to be double vaccinated with an approved COVID-19 vaccine as well as wear masks throughout the museum. Further information can be found here: https://www.maas.museum/visitor-safety-information/