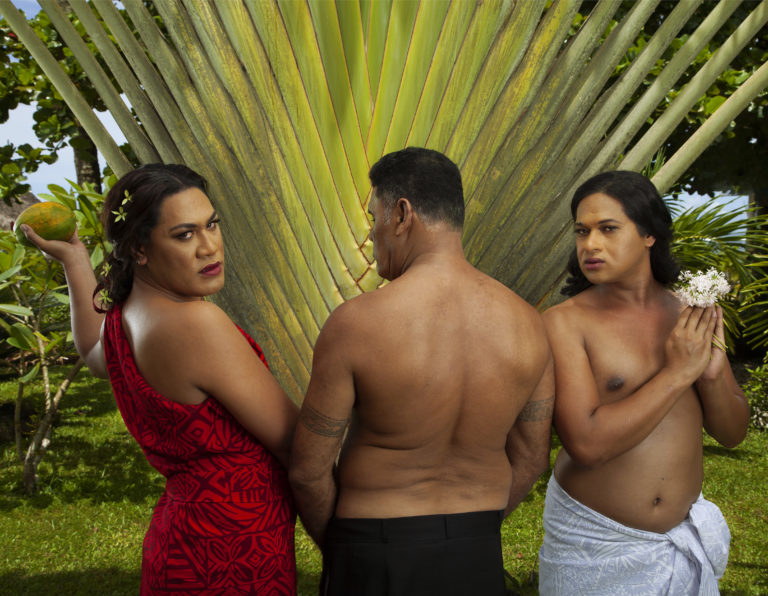 Kihara created Paradise Camp after recognising Sāmoa and aspects of the Fa’afafine community in Paul Gauguin’s post-impressionist paintings, which she was first introduced to when presenting a solo acquisitive exhibition at New York’s Metropolitan Museum of Art in 2008. Paradise Camp comprises 12 tableau photographs featuring a cast and crew of 100 people in Sāmoa, repurposing and upcycling Gauguin paintings. Reflecting on the injuries of colonialism and patriarchal structures by presenting a renewed worldview that is open, inclusive and humorous, each image has a depth of meaning related to the impact of colonialism on the Fa’afafine community and Western misconceptions of the Pacific.

Shot and filmed on location in Upolu Island, Sāmoa, Kihara’s performative photography is presented against a vast wallpaper of a landscape decimated by the 2009 tsunami. Works include Fonofono o le nuanua: Patches of the rainbow (After Gauguin) featuring a group of Fa’afafine models from the Aleipata Fa’afafine Association who were among the first responders to the tsunami posing riverside. Inspired by the faleaitu (house of spirits) skits performed in Sāmoan culture, Kihara also casts herself as Gauguin in Paul Gauguin with a hat (After Gauguin), transformed via silicone prosthetics and costume.

For the Powerhouse, Kihara will complete an eight-week creative residency at Ultimo and undertake community engagement, including with First Nations artists.

‘I’m inspired by the Powerhouse Museum’s Pacific collections and look forward to presenting new works as part of the Paradise Camp exhibition that questions the idea of modernism as a singular Western heteronormative phenomenon,’ artist Yuki Kihara said.

‘Following on from presenting Paradise Camp to 485,079 visitors at the Venice Biennale, it’s timely to exhibit Kihara’s ensemble exhibition in Sydney with its focus on some of the most urgent issues of our times including intersectionality, small island ecologies and environmental crises,’ curator Natalie King said.

‘Powerhouse is thrilled to present the Australian premiere of Paradise Camp. Yuki Kihara is an incredible artist whose provocative and engaging work was one of the standout exhibitions at this year’s Venice Biennale. We look forward to seeing Kihara’s unique artistic response to the Powerhouse’s collection and sharing this internationally acclaimed exhibition with Australian audiences,’ Powerhouse Chief Executive Lisa Havilah said.