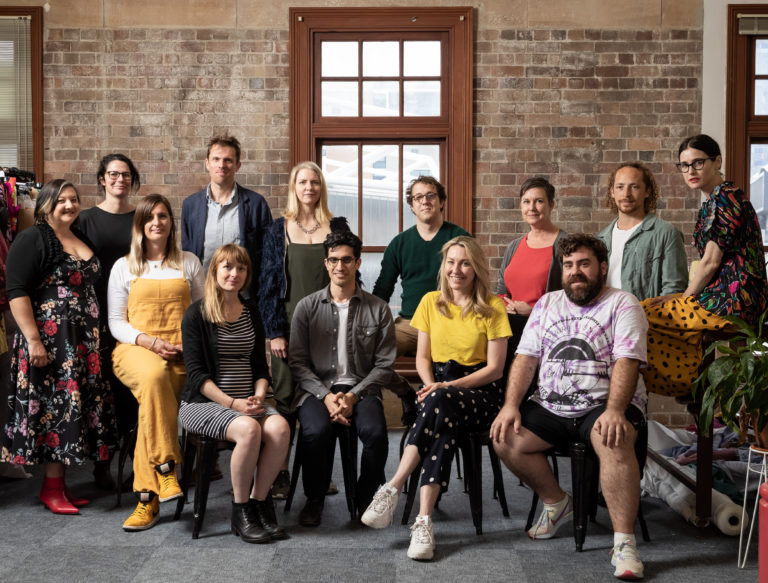 The program was launched earlier this year, open to expressions of interest, and received more than 65 applications from NSW-based creatives working across a diverse field of practices. The selected residents will be provided with dedicated subsidised workspaces at the Powerhouse Museum in Ultimo from October 2019 and the opportunity to collaborate with the museum team during their residency.

The internationally renowned Australian fashion duo, Romance Was Born (Anna Plunkett and Luke Sales), whose collaboration with Australian designers Linda Jackson and Jenny Kee can currently be seen at the Powerhouse as part of the new major exhibition, Step Into Paradise.

Queer Screen, one of the largest film festivals in the Southern Hemisphere to celebrate LGBTQI+ lives, stories and culture and producers of the Mardi Gras Film Festival and the Queer Screen Film Festival will also join the residency.

“I am thrilled to welcome these artists and creatives as residents of the Powerhouse. We are committed to supporting NSW creative industries and the development of contemporary practice. Through this new residency program, we will support emerging and established practitioners to expand their practice and create new work in a collaborative environment” said Lisa Havilah, Chief Executive, Powerhouse Museum.

Anna Tregloan
Anna Tregloan is a designer, artist and creative producer. For over 25 years she has been collaborating on contemporary theatre, dance, live-art, immersive installations and interactive media as well as presenting performed installations, video and photographic works, exhibitions, interventions and participatory practice. While maintaining a unique vision she predominantly works in collaboration with companies, presenters and other artists and often in partnerships that grow over several projects and many years.

Common Office
Common Office was founded in 2018 and is engaged in a range of design work from furniture, houses, housing and large scale territorial design, research and speculative projects. Common Office was founded by Rob Meyerson in 2018. Currently Rob co-ordinates the 1st Year Architecture program at Western Sydney University and previously worked in the Sydney offices of Bates Smart and Supercontext and for Andrew Berman Architect in New York City.

Dinalie Dabarera
Dinalie Dabarera is an illustrator and is passionate about the role of illustration in telling stories. She creates work intended for a young audience, including two animated television series for Disney Australia and ‘The Book of Once Upon a Time’ which was a finalist for Best TV Series Children at the AEAF (2019). She also completed a series of six public artworks in collaboration with Paper Moose and commissioned by the City of Canada Bay and in 2016 was nominated for the Children’s Book Council Australia Award for New Illustrator for her work on ‘The Cat with the Coloured Tail’, written by Gillian Mears.

Electronic Music Conference
Electronic Music Conference (EMC) was founded in 2012 as a two-day conference focused on the growth of the electronic music business globally. Since then, EMC has grown to an annual program which includes an Artistic Program (EMC Festival), an Industry Program (EMC Conference and EMC Connect) and a Night Time Economy Program (Global Cities After Dark). The culture of electronic music is at the core of EMC’s practice, and through this lens the programs reflect the social and cultural changes not only occurring in Sydney, but also in the Asia Pacific. The partnerships between EMC and the many curators working together has led to the festival’s growth. In 2018, the festival featured over 70 artists across 14 events attended by over 6,000 people.

A filmmaking collective (Four Leg Films, Bistro and Birdland)
Chris Thompson, producer, and Alex Barnett, post production supervisor, are the creative directors of the multi-award winning production company Four Leg Films. Their goal is to create content that punches above its weight for the quickly evolving SVOD platforms, while collaborating with and supporting new and diverse talent. Elliot Clifford (Bistro) is an emerging Producer. He recently completed the digital series Carpark Clubbing for ABC iView, and is currently developing screen projects that broaden the scope of diversity both on screen and behind the camera. Kerinne Jenkins (Birdland) is a writer and director working across a number of platforms including narrative podcasts made with 3D sound, Virtual Reality and more traditional short films and music videos. Her work has been selected for the prestigious Accelerator Lab at Melbourne International Film Festival, Flickerfest, Denver Film Festival and more.

Heidi Axelsen + Hugo Moline
Heidi Axelsen + Hugo Moline are an experimental spatial practice, drawing on forms and tactics from architecture, art and social process. The core team comprises artist Heidi Axelsen and architect Hugo Moline. They also include other collaborators, co-workers and contractors on a project by project basis. In their practice they make things not as an end in themselves, but rather as a means to foster alternate relationships, both between people and the material world as well as amongst people.

Julian Wessels
After many years of recording and mixing bands Julian found his passion for audio installations and audio post production at university. Spurred on to pursue this career path Julian sought out an internship with Sydney production house Sonar Sound. Julian has been full time at Sonar ever since, working on a multitude of TV shows and immersive installations throughout Australia.

Queer Screen
From humble beginnings in 1993 Queer Screen is now one of the largest film festivals in the Southern Hemisphere to celebrate LGBTQI+ lives, stories and culture on the big screen. They aim to transform and engage individuals and communities through queer storytelling on screen, guided by our values of diversity, creativity, inspiration, inclusiveness and pride. Queer Screen currently produces two festivals per year – the Mardi Gras Film Festivaland the Queer Screen Film Festival, with an audience reach of over 25,000. significant cultural event on Sydney’s calendar.

Romance Was Born
Romance Was Born is a tour de force of contemporary Australian fashion. Fusing together their unique storytelling vision and design prowess, the internationally renowned duo Anna Plunkett and Luke Sales met while completing their degree in fashion design and in 2005 and established the inimitable label Romance Was Born. Collaboration is an integral part of the design process for Romance Was Born. This innate drive has seen them work with other creatives or brands that share their passion and imagination, such as artists Del Kathryn Barton, Stephen Bush, Sarah Contos, Kate Rhode, designers Linda Jackson, Jenny Kee, as well as Disney, Marvel and author May Gibbs.

Rosie Deacon
Rosie Deacon works primarily in video, sculpture and installation. Her work investigates the spectrums and extremities of creativity and obsession. Often grotesque, yet strangely familiar, her work draws on the natural symbioses that exist between humans and animals, home and habitat.