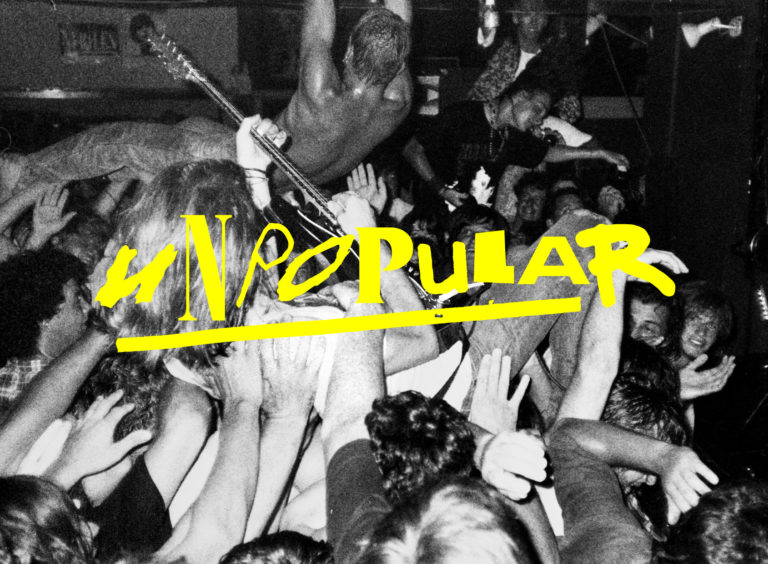 Opening to the public on Thursday 27 October, Unpopular features more than 200 objects from Pavlovic’s extensive archive, alongside stories and oral histories from the community of artists he worked with, bringing visitors backstage and behind the scenes of this era of live music.

Pavlovic began his career promoting shows, music tours and festivals at 19, making his name bringing ground-breaking international musicians to Australia, including the first and only Australian tour for Nirvana, one of the most influential bands in music history.

In 1995 Pavlovic launched the hugely significant Summersault festival across five Australian cities, shaping an era-defining bill that included Beastie Boys, Sonic Youth, Beck, Foo Fighters, Pavement, Rancid, Jawbreaker, Bikini Kill and The Amps. Realising Summersault could celebrate the emerging cultural movement through avenues beyond the music festival, Pavlovic engaged Aaron Rose of Alleged Gallery in New York to curate an art exhibition titled Culture is Our Business that toured in parallel with the music and showcased work by emerging artists such as Spike Jonze, Mike Mills and Rita Ackermann.

An exhibition highlight is a spotlight on Nirvana, featuring live footage of the band’s first performance in Australia at the Phoenician Club in Sydney in 1992 and Kurt Cobain’s Martin Guitar (on loan from Peter Freedman, founder of RØDE), played during his 1993 MTV Unplugged performance in New York, now holding the record for the most expensive guitar in the world. Other international bands that Pavlovic brought to Australia and are featured in the exhibition include the likes of Fugazi, Hole, The Lemonheads, Mudhoney, Jon Spencer Blues Explosion, Helmet and many more.

Artist Lillian O’Neil and artist and filmmaker Julian Klincewicz were invited by Pavlovic to re-interpret the archive material and have created major new works for the exhibition.

‘‘Summersault brought a complete lifestyle to accompany the music. There was art for your eyes, streetwear for your back. A club night party or mega-festival performance. There was no music-genre tribalism. It was just either cool or not. Many of the artists were at the peak of their powers, little did we know that it was the beginning of the end of what was an exceptional period in music.” said Pavlovic.

“We came down here because the opportunity was beyond imaginable in a way… it was, oh my god, now we’re gonna go to the other side of the hemisphere to play music. Never in my wildest dreams did I think that would be possible. […] this place was a mystery to us. We had no idea what to expect. We did love bands from Australia and there was some sort of Seattle-Australia connection,” said Dave Grohl, drummer of Nirvana / founder of Foo Fighters.

“Unpopular looks back at an extraordinary time for live music through the lens of Stephen Pavlovic, telling the story of the international and homegrown musicians and communities that drove the thriving Australian alternative music scene of the 1990s. Pav was there in it all and we are so thankful that he created this important archive that connects us with a time of great creativity,” said Lisa Havilah, Powerhouse Chief Executive.

To accompany the show, the Powerhouse will be releasing the publication, UNPOPULAR, written by Pav and offering diary-like insights into the bands, shows, and everything in between as alternative music moved out of the fringes and into the mainstream.

Alongside the exhibition and publication, the Powerhouse will present a series of programs including a music photography masterclass with Sophie Howarth, analogue art workshops led by designers Ben Brown and Paul Curtis and a curated Powerhouse Late.

Across three nights from Friday 2 Dec – Sunday 4 Dec, Powerhouse will screen documentaries that pay homage to the key rock bands of the periods, including Cosmic Psychos: Blokes You Can Trust (2013), Fugazi’s Instrument (1999), Cobain: Montage of Heck (2015), The Man from Mo’Wax (2016), and the Australian premiere of Freakscene: The Story of Dinosaur Jr. (2021). Through personal archives and interviews, these films capture the energy and work ethic of bands that defined the movement. Tickets include film screenings and late-night exhibition access.

The artists behind the posters in Unpopular, Ben Brown and Paul Curtis, will lead analogue art workshops and drop-in sessions for families and young people during the April 2023 school holidays focused on music and analogue art processes. Participants can learn different illustration techniques to design and create music posters using a variety of art mediums, such as collage, paint, liquid chalk, and screen printing.  Alongside poster making, a series of digital workshops will explore music making and coding.

Sophie Howarth, who documented many of Pavlovic’s tours, will lead a music photography masterclass that explores her career, the history and visual anthropology of music photography and how to capture the movement and mayhem of rock musicians. The masterclass will be held at Powerhouse Ultimo, with participants able to capture content at the Powerhouse Late: Unpopular on 3 November 2022.

Unpopular is presented with the support of Major Partner JBL Professional.