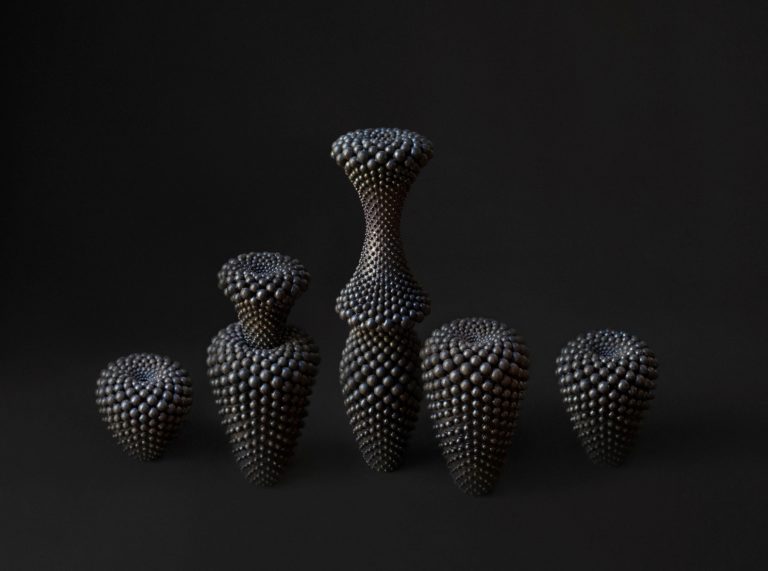 The Powerhouse has today launched the Willoughby Bequest 2020 Commissioning Program. Six artists who work across glass and ceramics have been commissioned to create a new work for the Powerhouse Museum’s collection.

“Barry fell in love with Australian studio glass when he saw his first exhibition at the Glass Artists Gallery in Glebe, and from there became an avid collector of studio glass and ceramics. He was a friend and patron of the Powerhouse and delighted in seeing the Museum’s collection grow. He had an unrivalled enthusiasm for new developments in Australian art glass and ceramics,” said Eva Czernis-Ryl, curator at Powerhouse Museum.

“The Powerhouse is grateful that this bequest has enabled the Museum to commission new works from six Australian artists working today in his honour,” said Lisa Havilah, Chief Executive, Powerhouse Museum.

Scott Chaseling
Scott Chaseling’s primary medium has been glass and his practice pushes the idea of the vessel into large scale sculptures and installations. His practice had been underlined by an experimentation to find a narrative in form and material, which has gradually become more abstracted over his 30-year career. He studied sculpture at the South Australian College of the Arts and then as an associate at the JamFactory in Adelaide. He has travelled and exhibited in many countries, developing work in new locations through teaching, residencies and workshops including in Japan, England, France and extended periods in Germany and the USA. He is currently a PhD candidate at the University of Wollongong studying sculpture. Throughout his career he has been awarded numerous prizes and awards such as the Gold Medal of the Bavarian State Prize, Germany, the Queen Elizabeth Silver Jubilee Award and more recently the Hindmarsh Prize in Australia. His artwork is represented in many national and international public collections, including Museum Kunstpalast (Germany), the National Gallery of Australia, the 21st Century Museum of Contemporary Art (Japan) and the Museum of Glass (America). Recent solo exhibitions have been in the European Museum of Contemporary Glass (Germany), the Musée du Verre (France) and Canberra Museum and Gallery.

Tim Edwards
Tim came to glass from a ceramic background, developing a bold sense of design and surface manipulation. This can be seen in the works for which he has gained an international reputation. Tim’s work is blown or shaped in the hot shop and then cut, carved and ground using the lathe with diamond and stone wheels. He has a strong connection to JamFactory, first participating in a traineeship in Ceramics in 1992 and then Glass in 1995–96. Tim also worked as an artist at Blue Pony studio from 2001 to 2008. He now works as an artist and glass studio technician at JamFactory. Tim has spent time in North America as a teacher and student at the Pilchuck Glass School, Haystack School of Crafts and at Ohio State University as a Scholar in Residence. In 2007 he undertook a residency at the Tacoma Museum of Glass as a visiting artist. Exhibiting nationally and internationally, Tim has artworks in major public collections, notably the Corning Museum of Glass, Corning, USA, Museum of Glass, Tacoma, USA, National Gallery of Australia, Art Gallery of South Australia, National Gallery of Victoria, Art Gallery of Western Australia and Wagga Wagga National Art Glass collection. In 2006 Tim was awarded the Rakow Commission from the Corning Museum of Glass, being the second Australian to receive this significant award.

Steve Harrison
Steve Harrison was born in the UK, and his parents emigrated to Australia when he was four years old. He was trained at East Sydney Technical College and Wollongong University, was a student of the acclaimed Japanese potter Shiga Shigeo and has a doctorate from the University of Western Sydney. Harrison has lived and worked in the tiny village of Balmoral in the Southern Highlands, NSW, for the past 43 years. During that time, he researched the local ceramic materials and specifically the use of sericite mica in the development of translucent porcelain. Admired for his technical skill, he makes simple yet exquisitely crafted vessels which dazzle with refined forms and beautiful glazes made from local materials. His porcelain bowls have been described as ‘breath-taking in integrity’. He says: “I made our own fire bricks to build our kiln from local bauxite and built our studio from local mud for the home-made mud bricks. I fire my pots in a wood fired kiln and we grow most of our food and fuel here, sustainably, on our own land. I also built a solar fired electric kiln to do some of our firing… the philosophy of self-reliance has influenced the work that I make.” Harrison has also been a part-time ceramic teacher, written half a dozen books on ceramics and ran a ceramic technology consultancy company called ‘Hot and Sticky’ Pty Ltd.

Nicolette Johnson
Nicolette Johnson is a ceramic artist whose work explores symmetry, botanical motifs, and the importance of the artefact. Nicolette was born in London, England in 1990, grew up in Texas, USA, and today is based in Brisbane, Australia. Working in stoneware and employing wheel-throwing, coiling, and sculpting techniques, Nicolette applies a modern aesthetic to re-imagined ancient forms. Her work is included in the permanent collections of the National Gallery of Victoria and the Museum of Brisbane. With a background in photographic art and social documentary, Nicolette began studying ceramics in 2015 and is continuing her practice-led exploration into functional and sculptural ceramic vessels, hand-making and firing each of her works in her Brisbane home studio.

Jennifer Kemarre Martiniello
As a contemporary urban-based Aboriginal (Arrernte) glass artist, Jennifer’s practice aims to produce a body of traditionally inspired works that will pay tribute to traditional weavers and provide recognition for these ancient cultural practices through the medium of glass. She began working in glass in 2008, having worked in textiles, photography, printmaking and sculpture since the 1980s, with a parallel career as a poet, writer and editor. Her present body of work is inspired by traditional woven eel traps, fish traps, and coiled and open weave baskets by Kaurna, Ngarrinjerri, Gunditjmara, Arrernte and Northeast Arnhemland weavers. She has won multiple awards for her work including the Canberra Critics Circle Award for Visual Arts (2013 and 2011) and the Aboriginal and Torres Strait Islander Arts Visual Arts Fellowship (2013–15).

Renee So
Born in Hong Kong and raised in Australia, London based artist Renee So works in ceramics and textiles. Her ceramic sculptures draw from the traditions of antiquity, historical portrait busts and ancient pottery. She has presented solo exhibitions across the world with notable exhibitions held at the Henry Moore Institute and De La Warr Pavilion in the UK (2019), Kate MacGarry in London and Roslyn Oxley9 Gallery in Sydney. She has been featured in group exhibitions at Whitechapel Gallery and Saatchi Gallery (London), Shanghai Biennale (2006) and the National Gallery of Victoria. She has been the recipient of multiple residencies and awards for her work including the the Sidney Nolan Trust Residency, Australia Council – London Studio Residency and the Freedman Foundation Travelling Scholarship for Emerging Artists in 2003.