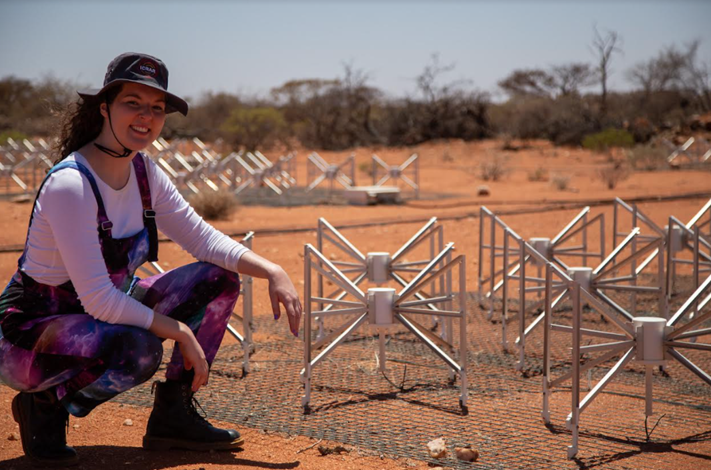 The Powerhouse has today announced the appointment of Kat Ross, astrophysicist and founder of the #IncludeHer campaign, as the new Sydney Observatory Astronomy Ambassador.

Kat Ross is a Ph.D. candidate at Curtin University, Perth, studying ‘baby’ black holes, galaxy evolution and the history of the Universe. A dedicated campaigner for women in STEM, Ross launched the #IncludeHer campaign after discovering NSW students in Year 11 and 12 Science were being taught by only two female scientists and almost 80 male scientists. Now a national movement, #IncludeHer aims to address this imbalance in the Australian curriculum to include a more diverse representation of scientists.

Advocacy for women in STEM will be a focus of Ross’ ambassadorship with Sydney Observatory. Working with Powerhouse curators, she will develop a portfolio of science programs, livestreams and learning programs that will engage students and audiences with astronomy and the history of women in astrophysics. On 24 September, Ross will present her first livestream from Sydney Observatory showcasing astronomical objects that women have created that have significantly contributed to our understanding of the Universe.

Ross follows Gomeroi astrophysicist Karlie Noon who was appointed as the first Sydney Observatory Astronomy Ambassador in August 2020. Noon presented her final Southern Sky Livestream as seen from the Observatory’s telescopes on 21 August 2021 which is available to watch on demand.

The Sydney Observatory Residency Program has been announced for a second year, with expressions of interest open until 11 October 2021.

Launched in 2020, the Sydney Observatory Residency Program provides a supported environment for researchers, artists and creatives to undertake a project relating to the Observatory’s disciplines, collection and programs. Residencies are open to established and emerging academic researchers, artists, scientists and creative organisations, with interdisciplinary collaborations encouraged. The program offers studio and research space in-kind at the Sydney Observatory alongside the opportunity for residents to collaborate with Powerhouse curators on projects and public programs. Each 2022 resident will receive a $5,000 honorarium.

Lisa Havilah, Chief Executive, Powerhouse Museum said:
“Encouraging young women to consider a career in STEM is a focus of Sydney Observatory and the Powerhouse. We are thrilled to welcome Kat Ross as the next Sydney Observatory Astronomy Ambassador. We look forward to working with her to celebrate the many achievements of women in astronomy.”

Kat Ross, 2021 Sydney Observatory Astronomy Ambassador said: “I have been a strong advocate for women in STEM for several years. Currently, only around 30 percent of all female students select STEM-related subjects in higher education, and I believe a large factor contributing to this is the lack of diverse representation in our science curriculum.

Celebrating the achievements of women in astronomy will inspire young women to explore a career in this field. This will be a large focus of my ambassadorship and I am thrilled to continue this important work with Sydney Observatory.”

Built in 1858, Sydney Observatory is positioned on the highest point of Warrane (Sydney) and is considered a site of significance for the Eora nation. The Observatory plays a central role in the history of timekeeping, meteorology and astronomy in Australia. For over 160 years, it has led many significant projects, including the creation of New South Wales’ first meteorological records and the charting of over 430,000 stars in the southern sky.