HISTORIC ARHATS PRESENTED FOR THE FIRST TIME OUTSIDE KOREA 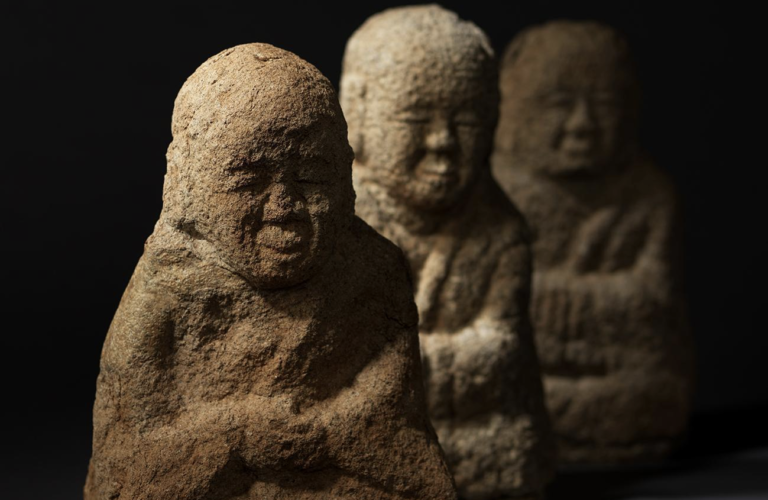 The Powerhouse has today announced details for its major summer exhibition, Five Hundred Arhats of Changnyeongsa Temple, opening on 2 December 2021.

The arhats are ancient stone figures discovered in 2001-02 among the ruins of the Changnyeongsa Temple in South Korea’s Gangwon-do Province, believed to have been built during Goryeo dynasty (918-1392) and destroyed in mid Joseon dynasty (1392-1879). The stone statues depict ‘arhats’ – ‘nahan’ in Korean – known in Buddhism as one who has attained enlightenment. The arhats represent five hundred disciples of the Buddha who gathered to compile his words into scriptures after the Buddha entered nirvana. Although they have attained enlightenment, they defer entering nirvana themselves and remain in their human state in order to teach and save sentient beings.

Presented in collaboration with the Chuncheon National Museum of Korea, the Australian premiere will present 50 stone arhats and one Buddha in an immersive exhibition designed by contemporary Korean artist Kim Seung Young.

Produced in collaboration with the Chuncheon National Museum of Korea, the Australian premiere of Five Hundred Arhats will mark the 60th Anniversary of the establishment of diplomatic relations between Korea and Australia.

Powerhouse, Chief Executive Lisa Havilah said: “Five Hundred Arhats was Korea’s most popular exhibition in 2019 and the Powerhouse is thrilled to present this incredible exhibition outside of Korea for the first time. Forging new collaborations with international institutions and artists is a key focus for the Powerhouse. This exhibition provides our audiences a unique opportunity to engage with Korean culture.”

Curator of Five Hundred Arhats, Min-Jung Kim said: “Unlike images of the Buddha or bodhisattvas, the arhats from Changnyeongsa Temple resemble ordinary people, yet their childlike simplicity and spiritual aura touch our hearts and teach us that we can all be enlightened beings. This exhibition presents the beauty created by unknown Korean craftsmen in the distant past, together with an innovative contemporary Korean artist.

Chuncheon National Museum Director, Kim Woollim said: “It is an honour to introduce Korea’s Arhats of Changnyeongsa Temple to Australia on the occasion of the 60th Anniversary of Korea-Australia diplomatic ties. Although the expressions of the arhats are plain and simple, they have a mysterious power that touches the human heart. We hope that the arhats will soothe tired minds and that the day when Korea and Australia can meet in person, comes as soon as possible.”

Major Sponsor
Ministry of Culture, Sports and Tourism of the Republic of Korea