Australian Geographic Nature Photographer of the Year Opens in Sydney 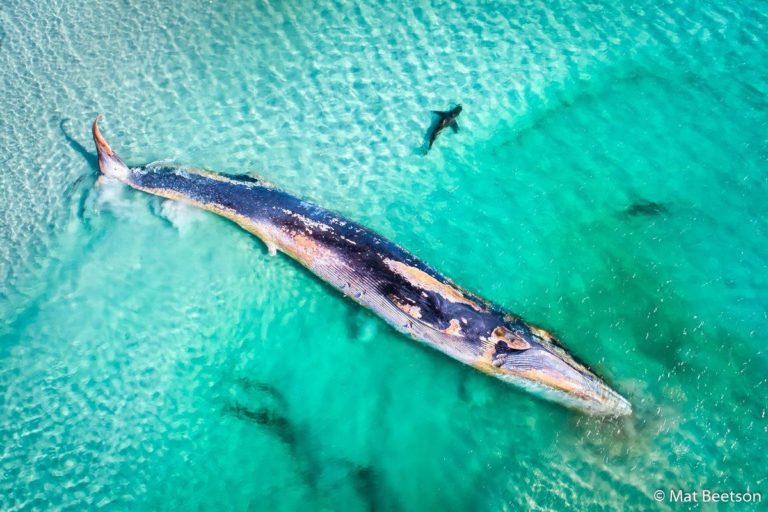 The Australian Geographic Nature Photographer of the Year 2019 exhibition opens today at the Powerhouse Museum in partnership with the Australian Museum until 20 October 2019.

Captured by Mat Beetson while on a photographic trip with a friend, the photograph taken in Cheynes Beach in Albany, WA with a DJI Phantom 4 Pro Drone, sees a beached Fin Whale being circled by sharks. The photograph is the competition’s first drone picture to be chosen as the overall winner, and was selected by a panel of judges from a selection of over 2000 submissions.

Winner Mat Beetson said: “I was actually in the Great Southern region of WA to photograph the beautiful beaches but a turn in weather with a crazy storm made it a little tough to fly a drone. We heard from some locals that there was a beached whale at Cheynes Beach. It was unreal, arriving at a peaceful coastal town with a pristine beach and then seeing this huge whale not even five metres from shore – we then noticed the thrashing close by and realised that a few sharks had also stopped by. I launched the drone to see the aerial view and captured a sequence of photographs, this shot was one of the last ones I took and I was very lucky that the shark came back for a look.”

Beetson has been involved in photography for more than 20 years with his focus and passion being landscapes and wildlife.

Competition judges Justin Gilligan, Glenn McKimmin and Tui De Roy said: “Despite seeing millions of nature photographs over the decades, we have never seen anything that remotely resembles this image. Unique and exciting, it reveals incredible beauty in death. Rather than being an inanimate scene, the image is given life by the circling shark, which in turn reminds us of the ecological function of the dead whale, providing food and energy to the living organisms around it. The image surprises by revealing such a shocking scene in a beautiful setting, and speaks volumes of the new dimension the latest technology has opened up for photographers.”

The winners and runners-up of the ten categories have also been announced here.

The Australian Geographic Nature Photographer of the Year 2019 exhibition opens today at the Powerhouse Museum.