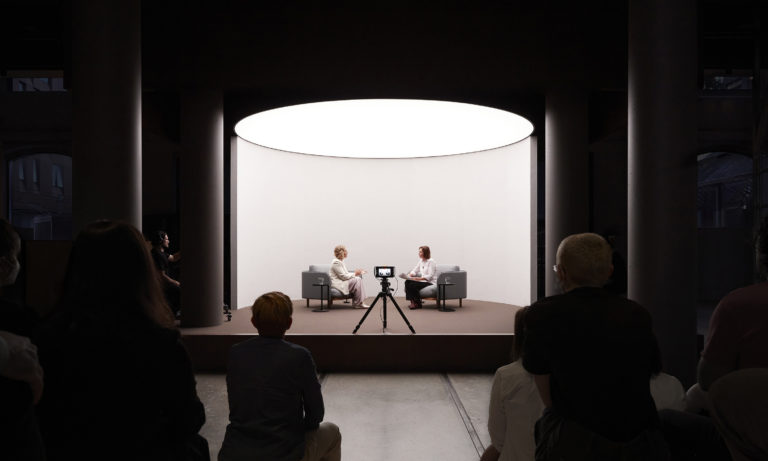 What if we told you that there is hope buried beneath the never-ending news cycle of the climate-change catastrophe? From regional farmers sequestering soil carbon, Traditional Owners managing Country through cultural burning, architects building carbon-neutral homes to entrepreneurs leading the world’s most ambitious renewable energy projects, each conversation presents an inspired narrative of invention, community and resilience. Recorded in a former coal-burner, 100 Climate Conversations looks away from an architectural artefact towards the innovations of the present and to the people committed to preserving the world as we know it.

Live conversations, hosted by some of Australia’s most respected journalists, will be recorded in a custom-built recording studio within the Powerhouse at 10am each Friday until December 2023, with free registration open to the public. The exhibition, which will be the museum’s first to be certified carbon-neutral, was designed by Elizabeth Gadsby and Hugh O’Connor, with AV Content Creative Direction by Mike Daly. Curated by Catherine Polcz, the program takes inspiration from real world climate solutions and connects audiences with leading climate innovators. Recordings of all 100 conversations will be incorporated into the exhibition as it continuously evolves over two years.

Associate Professor Adriana Vergés leads a research group at the UNSW Centre for Marine Science and Innovation that focuses on the ecological impacts of climate change and the development of restoration solutions to rewild our coastlines. In conversation with investigative journalist Paddy Manning, she discusses her work restoring seagrass ecosystems, opening new carbon sinks and mitigating climate impacts.

Sasha Purcell is a proud Torres Strait Islander woman, lawyer, Fulbright scholar and delegate with the United Nations Association of Australia. She is an advocate for First Nations Peoples living on the front lines of climate change, facing saltwater intrusion, sea level rise and ocean acidification. In conversation with Walkley Award-winning journalist Yaara Bou Melhem, Purcell discusses her determination to use the tools of international law to hold governments and industry accountable.

The Hon. Zali Steggall OAM MP is the Federal Member for Warringah, NSW. She introduced a private Member’s bill calling on the Federal Parliament to re-establish the Australian Climate Commission and set a national target of net zero carbon emissions by 2050. In conversation with multi-award-winning journalist Marian Wilkinson, Steggall discusses her push to increase climate policy in Australia since defeating Tony Abbott for the Warringah seat.

The 100 climate leaders have been selected for the significance of their research and impact of their actions towards mitigating the effect of climate change. They reflect a diverse range of expertise and knowledge, from politicians and scientists, to lawyers, firefighters and architects. They include Atlassian co-founder and co-CEO and renewable energy investor Mike Cannon-Brookes, NSW Treasurer and Minister for Energy Matt Kean, world-leading authority on coral and advocate for the Great Barrier Reef Dr Charlie Veron OAM, Lord Mayor of Sydney Clover Moore, materials scientist, inventor and NSW Australian of the Year 2022 Professor Veena Sahajwalla, renewable energy researcher and commentator Ketan Joshi, traditional burning practitioner, author and co-founder of Firesticks Victor Steffensen, founding Director of Breathe Architecture Jeremy McLeod, former Commissioner Fire and Rescue NSW Greg Mullins AO and D’harawal Elder, botanist and author Aunty Fran Bodkin.

“Sustainability is more than a requirement for the Powerhouse, it is our story and responsibility. Operating at the intersection of arts and sciences, we demonstrate leadership, through an active response to climate change. 100 Climate Conversations will play an important role in raising awareness and presenting an evidence-based, empowering vision of the future. Through the pioneering expertise of thought leaders, researchers, technologists, and First Nations knowledge holders caring for Country, this ambitious project will catalyse action at this critical moment in history,” Lisa Havilah, Chief Executive, Powerhouse Museum said.

“Decarbonisation is Australia’s biggest economic opportunity. As one of the sunniest, windiest, smartest nations on earth, we are primed to become a renewable energy superpower. Conversations like these inspire Australians and create the change needed to reach our full potential,” Mike Cannon-Brookes, Atlassian co-founder and co-CEO said.

“We have some amazing leaders in the climate change space in Australia and I’m incredibly humbled to be considered among them for 100 Climate Conversations. Global warming needs to be the priority of this next decade but solving it can sometimes feel daunting and make people overwhelmed. These 100 Climate Conversations show how you can be proactive and bring forward solutions that focus on the positives. Congratulations to the team at Powerhouse Museum for taking the lead on this important topic that touches the lives of us all,” Zali Steggall OAM MP said.

Keep up to date by subscribing to the podcast HERE