In 2004, the Liberal government under John Howard rushed legislation into parliament which changed the definition of marriage in Australia.

5 (1) marriage means the union of a man and a woman to the exclusion of all others, voluntarily entered into for life.

88EA Certain unions are not marriages

A union solemnised in a foreign country between:

(b) a woman and another woman;

must not be recognised as a marriage in Australia.

In his announcement of the changes, Howard added: “We are also going to amend the legislation to ensure that same sex couples…will not be eligible as prospective adoptive parents under any multilateral or bilateral agreement concerning the adoption of children to which Australia is a party”.

In the thirteen years since the amendment, more than twenty countries have made changes to their laws, acts, charters and constitutions, not to ban same-sex marriage, but to embrace it as part of their culture and nationhood.

Despite the governance of the Australian parliament, many Australians find it odd that a progressive nation has such out-of-step clauses in its marriage act. Under constant pressure from the ALP, the Greens, independent MPs, and the community, the Liberal government under Malcolm Turnbull (himself in favour of same sex marriage) announced that a postal survey will be conducted on the issue of marriage equality.

In September, October and early November 2017, Australians were asked to vote on whether or not they believe same-sex couples should be allowed to marry. The postal survey only asked a single question and that question could only be answered ‘Yes’ or ‘No’. The Australian Bureau of Statistics (ABS) conducted the postal survey.

The Museum of Applied Arts and Sciences collects and documents objects linked to significant social issues, and the issue of marriage equality is certainly significant. The Museum has collected material culture related to activism and political change, reflecting that Australians in the twentieth century were serious in their push for change. As the Australian Government followed the United States into a policing action in Vietnam, the Australian people followed Americans in protesting the Vietnam War. This influenced the Labor Government under Gough Whitlam to abolish conscription and release all conscientious objectors from jail, and to bring home Australian troops still deployed. The image below from the collection shows that people from many different backgrounds opposed Australia’s involvement in Vietnam.

The environment has been a constant source of strong concern for Australians since the 1970s. Deforestation, river damming, and nuclear power all led to both the rise of professional activism, and much more socially aware political parties.

Trade unions have always been agitators for fairness and change in the workplace; but the green bans of the 1970s were a significant agent of social change. In reaction to over-development in Australia’s urban areas, the Builders Labourers Federation resolved that a worker can insist their labour not be used in harmful ways, leading to construction ceasing on buildings which would destroy parklands or remove accommodation from people in low socio-economic situations. These were successful campaigns in the 1970s.

It is important to document the social history of New South Wales and Australia with material culture to ensure the stories are kept in perpetuity. The Museum’s collection allows the people of New South Wales and Australia access to the objects and empirical documentation of significant social and cultural events which represent change in the community. 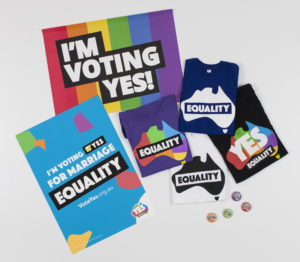 No matter what the winning yes vote will mean in terms of changing the Marriage Act, the collection of objects related to the marriage equality postal survey is central to preserving the story of this issue. Although a postal survey is certainly not what a large majority of Australians believe was the most apt method available to deal with the issue, it did present an opportunity for the people of Australia to have a voice which expresses their opinions on marriage equality. The Vote Yes campaign, organised by Unions NSW, Equality Campaign, and Sydney City Council, and other socially conscious organisations, designed and produced t-shirts, badges, posters and street banners which promoted voting yes on the postal survey. Examples of these are now part of the Museum’s collection. Material representing the movement to preserve the Marriage Act has been sourced by the Museum’s Curatorial team and will provide examples of the vote no campaign. 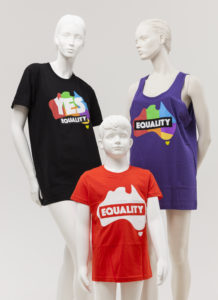 Material relating to marriage equality is also featured in the Museum’s Love Is… Australian Wedding Fashion exhibition. Tim Campbell and singer Anthony Callea’s wedding suits are on display, as well as ephemera on same-sex marriage.

One response to “Marriage Equality: for posterity”