Love takes us on a journey. Today I’d like to take you on a heartfelt journey exploring some experiences of women with Greek heritage unearthed during my research for a migration and community story for the Love Is…Australian Wedding Fashion exhibition.

My research commenced with a desire to connect our audiences with the experience of a migrant bride who immigrated to Australia during a peak period of female migration from Greece between 1957 and 1963. Initially, I was fortunate to meet with Nia Karteris, Chair of the Greek Festival of Sydney and Dr Panayota Nazou, author of the publication Greek ‘Proxy’ Brides in Australia: Experiences and Testimonies, who helped me establish some contacts in the Greek community.  During this meeting I discovered the potential challenge in finding a 1960s bride with her wedding dress and I will explore some of the reasons in this blog post.

Migration experiences varied between Greek families throughout Australia, however, the signing of a Migration Agreement between Greece, Australia and the Intergovernmental Committee for European Migration (ICEM) in 1952 prompted the subsequent mass or chain migration from Greece to Australia during the period 1952 – 1972 to help address socio-political and economic problems post-World War II as well as the individual needs of host countries. Initially, immigrants to Australia during this period were young and single males. As a result, successive Greek female immigrants predominantly immigrated as dependent siblings, daughters, wives or brides. For Sydney, the Patris made 91 voyages to Australia between 1959 and 1975, transporting Greek immigrants to Australia and became known for uniting ‘brides’ with their future husbands and new lives in Australia. Often termed ‘proxy’ brides, women immigrated to Australia following nomination by families and their fare was either assisted by the Government or privately paid with view to the women marrying and starting a family upon arrival in Australia.

Basilios and Fiona Minas shared their story with me, and shed light on the emotional experiences associated with proxy bride arrangements. Having previously immigrated to Australia, Basilios worked in various parts of Australia before settling in Hobart and establishing a new life in Australia. His brother who remained in Greece, contacted Basilios about a woman living in their hometown community as a prospective bride and partner for him in Australia. With only a photograph as an introduction, Basilios arranged for Fiona (Fanni) Macris to immigrate to Australia and begin a life together. Upon her arrival in January 1960, Basilios and Fiona had their marriage registered before celebrating publicly on the 20th May 1960 in a service at the Russian Orthodox Church in Hobart; the first Greek Orthodox Church in Hobart was still under construction at the time. For Basilios and Fiona it was a story of love at first sight and the couple remain happily married in Sydney today. Their stunning wedding photograph is on display in the chronological wedding photograph wall in the Love Is… exhibition.

As Nia Karteris and Dr Panayota Nazou had alluded, Fiona’s wedding dress was no longer in her possession. Following her marriage, she shared her dress with other new immigrants and in doing so, no doubt helped them to feel welcome in Australian society as they embarked upon a new life and family. The Minas family also discussed the importance of the ‘stefana’ in Greek Orthodox wedding custom and their precedence over the dress as a wedding keepsake.

Wedding crowns, or stefana, are an essential element in Greek Orthodox wedding custom. The stefana symbolize the glory and honour conferred by God during the sacrament. The crowns are joined by a ribbon and interchanged between the bride and groom three times signifying the union of the couple and their responsibility as King and Queen of the home. The stefana are often provided by the koumbaros or koumbara (official male and female sponsors of the wedding) for the exchange during the crowning ceremony; the climax of the marriage service.

I was also fortunate to meet with Fiona and Basilios’ daughter, Theodora, who generously offered to assist me with my quest for a wedding dress! With thanks to a social media campaign via Facebook, we found a wonderful story.

Stamatoula (Raissis) Pavlakis immigrated to Sydney from the island of Kythera in 1960. As the daughter of a traditional Greek family, her father arranged her marriage to George Pavlakis. George’s family financed the wedding, reception, honeymoon and deposit on a house believing that ‘if the groom can’t afford to dress you on that one day, how is he going to support you later? A man must be economically sound to marry.’ In respect of family unity, Stamatoula’s family provided the dowry including linen for the home, crockery and other household items. Stamatoula’s daughter Maria kindly shared her mother’s story with me and facilitated the loan of Stamatoula’s beautiful custom-made wedding dress and veil with delicate beading and lace detail for the exhibition. George and Stamatoula’s wedding photos capture the happiness of the day and support of the bridal party.

Theodora was also able to put me in touch with the woman who made Stamatoula’s bridesmaid dresses. As new bridal stores emerged in the 1950s to support Greek female immigrants, Anna Efstratiadis’ store, ‘Home of Brides’, opened in Sydney during this time and specialised in custom-made stefana and wedding gowns. Anna was an immigrant herself, having made the journey to Australia from Greece in the early 20th century.  She lived in Darwin and Shepparton working tirelessly in her family’s cafés before moving to Sydney. A self-taught dressmaker, it was in Sydney that she actively applied her skills through study at the pattern teaching school associated with Mark Foys department store on Liverpool Street, Sydney.

Following a couple of months study, she started her own business making wedding dresses from her mother’s house in Darling Street, Redfern. Anna employed as much love into her clients as she did with her dresses. Anna would offer her home to the brides and help them get dressed and prepared on the day as many women arrived without family and lived in small communal houses upon arrival in Australia. She would help the women feel comfortable ahead of their newly married life in a foreign country. 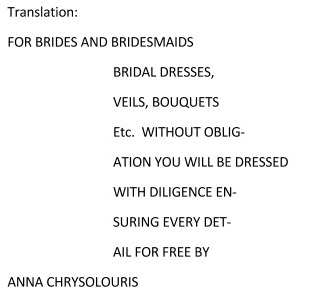 As a result of her flourishing business, Anna self-established ‘Home of Brides’ at 245 Elizabeth Street in the CBD opposite the ANZAC War Memorial. She continued to support the Sydney Greek and Italian communities selling and renting wedding dresses, bridal party dresses and accessories including bouquets and stefana. Anna married her husband Evangelos Efstratiadis OAM on Boxing Day 1960 and the story goes that while her hairdresser was getting everyone ready for the day, Anna was still sewing up the hem of her wedding dress and making final touches for her special day! Evangelos worked alongside Anna in the business, undertaking deliveries as well as taking care of the bookwork, allowing Anna to focus on her creative pursuits. He also assisted Anna with making stefana and developed his own machine to ease the process. Anna always preferred to work by hand and to this day still finds making stefana a source of relaxation. Evangelos was awarded an OAM in 1997 after many years of service and contribution to the Greek community and RSL of NSW.

Women like Fiona, Stamatoula and Anna brought knowledge and skills of their ‘homeland’ to Australia, particularly dress making and craftwork talents which have had widespread benefits to their local communities. The MAAS collection contains examples of Stamatoula’s prize-winning needlework produced between 1990 and 1997.

What started as a few short conversations resulted in a wonderful journey exploring the experiences of Greek immigrant families living in Sydney. I have the generosity of these families to thank for sharing their stories of love, migration and community.

5 responses to “Stories of love, migration and community”