We’ve amassed some beards in our collection! Curator, Rebecca Evans, takes us through her favourites.

This card (at top) features a cartoon of a giant, a representation of iconic Australian actor Chips Rafferty, sitting on a stool having his huge beard combed by a tiny female figure, Quentin Rafferty. She stands with her left foot on the end of the giant’s left shoe and her right foot on the top of the back of a chair. The card relates to the filming of Eureka Stockade (1949) in which Chips Rafferty played the role of famed activist and politician, Peter Lalor.

2. Lace panel showing the story of Judith and Holofernes 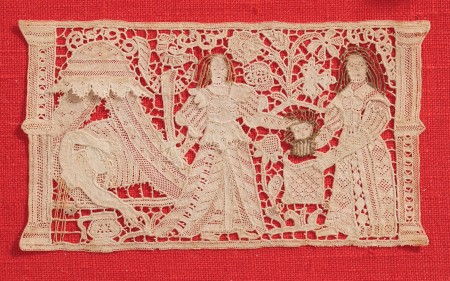 This needle lace panel depicts the slaughter of Holofernes by Judith. The hair on all the figures in this panel, including Holofernes’ beard, is stitched with strands of human hair.

The central figure is Judith, as befits her heroic status. She is brandishing a sword in her right hand and holds Holofernes’ head by the hair in her left hand. Her maid holds a bag ready to receive the head. To her right, Holofernes lies with silk ‘blood’ (once probably red, now pink) pouring from his severed neck.

This spectacular costume was made and worn by Peter Tully, Australian jeweller, designer and artistic director, in the 1990 Sydney Gay & Lesbian Mardi Gras parade. The orange fluffy beard on the molded plastic monkey’s face, paired with yellow hologram eyes, is hard to spot among the colours and commotion. It was exhibited in the 1991 retrospective Peter Tully: Urban Tribalwear and Beyond at the National Gallery of Australia.

4. Brooch with photograph and hair 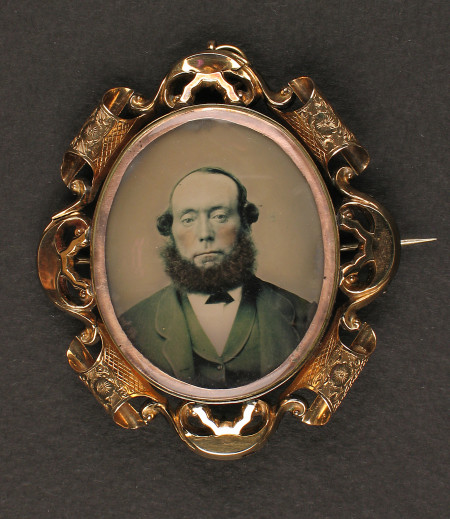 This handcoloured photograph dates from around 1870, the very early years of photography.

The subject, Captain R. J. Willer, sports some contrasting styles between the rebellious bristles of his beard and the careful curls of his hair. This brooch also features plaited human hair, in two colours, set into the back.

A head shot of actor Logan Moodley with moustache, beard and afro hairstyle. On the reverse of the photograph, Logan is described as an “actor from a Nativity play.”

If Bruno Benini particularly liked a shot he’d taken, he would make a print or ‘create a blow-up and then put it up on his studio wall’. The walls of his studio foyer were covered with these prints. Some were damaged over the years and thrown out, however many remain with corner pin holes intact. This is one of those prints.

We don’t know who the stately Mr Calquohoun was, but his portrait was produced by a photography studio in Sydney between 1880 and 1923. Robert Tyrell bought the studio’s collection, along with others around Sydney, in 1929. His collection, including this shot of Mr Calquohoun and his beard, eventually made its way to the Museum as the Tyrell Photographic Collection.

These carved timber figures depict a fiendish-looking Mr and Mrs Devil in the form of hall stands. Mr Devil appears at right with curly hair, horns, pointed ears and goatee-style beard. These carvings were made in Italy between 1870 and 1890 but the figures’ clothes were based on the styles of the 1600s.

These figures once graced the front hall of the St Kilda mansion, Charmwood, in Melbourne, owned by Mr Alfred David Hart, the donor’s grandfather. Mr Devil’s outstretched hand indicates that he originally held a tray for calling cards.

8. A board of shearers

Another gem from our Tyrrell Photographic Collection. This glass plate negative was taken by the Sydney firm Charles Kerry & Co. Prints from these negatives appeared in many Australian publications and albums of views, well into the early 1900s. In 1903, the company began producing postcards from these negatives, further establishing the images (including this one with the shearer’s full beard) as some of the most significant and best known early views of New South Wales.

A length of light brown, curled hair has been stitched to a black silk ribbon to create this hair accessory, somewhere between 1880 and 1920. It was purchased from the Wong Sat store in Fullerton, New South Wales.

Last, but not least, is the white hair and beard of our Father of Federation. Five-times Premier of New South Wales between 1872 to 1891, today’s politicians have many reasons to admire this iconic figure of Australia’s political history.