As well as being the title of a Beatles album, this word could be used to describe the deteriorating condition of a 1960’s Pop music scrapbook made by a Sydney teenager, Jennie Small. The wonderful scrapbook has kindly been donated to the Powerhouse Museum’s collection and it consists of pictures, clippings and headlines taken from newspapers and magazines between 1962-64. It helps document the rise of Beatlemania in Australia.

Other British pop groups from the 60’s are also included but the scrapbook is primarily about the Beatles. Four pages are now on display in The Beatles in Australia exhibition on show at the Powerhouse Museum. The other 112 pages have been digitised and are also on display, whilst the hard copy has been painstakingly conserved.

The cardboard sheets, originally tied together with string through 2 holes, contain many clippings on both sides. Other souvenirs attached to the pages include an envelope containing tickets for a Beatles concert, 2 Beatles coasters and some Top 40 pop charts. 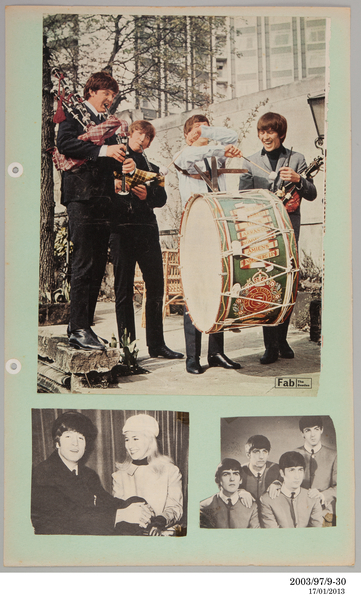 Most of the clippings have been attached with sticky tape, which were in various states of deterioration, depending on the brand and age of the tape. Conservator, Dee McKillop has conserved and stabilised the scrapbook by removing as much of the acidic sticky tape as possible. Considering how quick it is to apply, removing sticky tape can conversely be an incredibly laborious process. The acids from the adhesive tape weaken paper and cause it to deteriorate. Some of the tape was so brittle that it could be removed mechanically but a lot of the tacky tape had to be removed very gently with petroleum spirits, using cotton buds. A few pieces of sticky tape were left because of the fragility of the paper and the colour loss that would have occurred if it was removed.

The scrapbook is now stored in the Museum’s environmentally controlled basement, safe from light, insects and pollutants. It has also been digitised so that it can be viewed online.