Inside the Collection
Share: Email this
Sometimes museum work can take a long time to bear fruit and this collection of World War One portraits is a case-in-point. For most of the twentieth century they were buried within the huge collection acquired by James Tyrrell, the Sydney bookstore owner. Presumably he had acquired them in the 1920s and 1930s, either as part of one of the commercial studio collection’s built up by Charles Kerry and Henry King, or separately at one of the many auction’s he must have attended.

Unfortunately for these World War One photographs none of them had the clear studio marks found on many of the others from the King and Kerry studios. This means they were kept separate and were jumbled in with thousands of other unattributed negatives. Even when the entire collection changed hands from Tyrrell to the Consolidated Press these portraits remained undocumented within the rest of the collection.

In 1981 Consolidated Press generously donated the collection to the Powerhouse Museum and since then they have been digitised and gone on to become one of their best known collections. However another change of location did little to help this particular group of photographs on their path to discovery. Unlike the 5000 which had Kerry or King Studio captions the World War One portraits were part of a large and unwieldy group of around 3000 photographs which we think Tyrrell may have acquired from other sources over a broader time period.

Over the next twenty years or so the Powerhouse carefully renumbered, and stored all the negatives and completed cataloging of the Kerry and King negatives. But it was not until 2008, while I was working on writing up the histories of the Kerry and King collections, that I came across this other large group of negatives, neatly laid out in their storage drawers, but still uncatalogued.

Being curious I made a quick check through a random sample, just to be sure they were not images by Kerry or King.

Four years later the museum began looking at Centenary projects for World War One to be scheduled through 2014 and 2015. During one of these conversations I remembered having briefly seen the World War One portraits and I confidently announced there may be 20 or 30 that were unpublished in the Tyrrell collection.

This seemed to offer some wonderful opportunities, especially because I remembered some appeared to have the name of the soldier etched onto the edge of the glass plate. So I returned to the basement to perform a full check and get the actual number of plates. As I worked through the storage drawer I was amazed to find more and more of these portraits, all carefully bound in acid-free sleeves, row-after-row of them! By the time I finished there were 404 unpublished portraits with many of them bearing the name of the sitter.

In many ways when you work in a museum, particularly one with amazing collections like those in the Powerhouse Museum, you tend to get on with work even in the face of the most incredible discoveries. In this case I knew the find was important but it wasn’t until I was searching the embarkation records to find the names scrawled across the top of the plate that it dawned on me how significant this was. 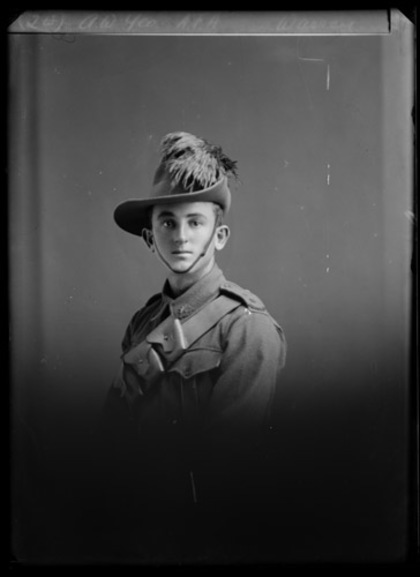 85/1286-974 Photographic negative, studio portrait of A W Yeo, World War One Gunner, 9 Field Artillery Brigade and 1 to 8 Reinforcements, glass / silver / gelatin, owned by Tyrrell’s bookstore, Sydney, 1914-1918For the first time, since they were photographed the Museum would be able to make available the images of 400 New South Wales soldier’s who had served in that horrendous conflict. Even better identifying the names meant we could provide families, perhaps for the first time, with photographs of their relatives.

As I was working through the negatives it also became apparent that they appeared to have been taken by a limited number of photographic studios, but unfortunately there were no studio marks to help. While some studio backdrops were different they were on the whole the same generic kind brought be any number of early twentieth century photographic studios. There was one clue however. On the top right hand corner of many of the negatives the word “Warren’ was repeated. At first I thought it may have been the name of a studio but eventually decided it was a reference to the sitter not the studio. 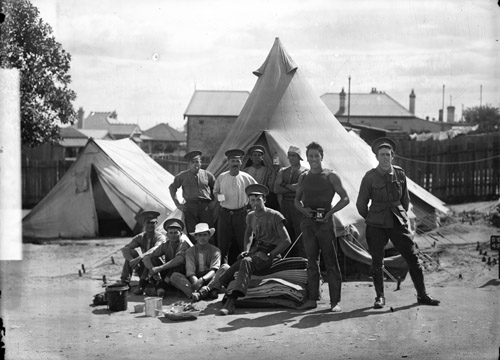 85/1286-994 Photographic negative, outdoor portrait of ten World War One soldiers, in front of tents with mess kits, Sydney [attrib.], glass / silver / gelatin, owned by Tyrrell’s bookstore, Sydney, 1914-1918After a bit of thought I remembered that there was a huge Gothic mansion complete with its own 130-acre (53-hectare) estate named ‘The Warren’ and this had been built by the wool baron Thomas Holt in the Sydney suburb of Marrickville. A quick Google search revealed that ‘The Warren’ had in fact been used as an artillery training camp during World War One.

This seemed to dovetail perfectly with another curious fact I had been noticing as I searched the embarkation records. Many of the soldiers in the portraits were listed as being Gunners from the 22nd Howitzer Brigade and the 1st, 7th, 9th and the 11th Field Artillery Brigade. So it seems the photographs were all taken in Sydney, maybe at a studio near the Warren (although this is just speculation), and most seem to relate to soldiers who embarked from Sydney around 1916.

While the research makes it clear more needs to be done, it’s been a better than average start. There are still many more photos to identify but in the near future the museum is hoping to begin an on-line project which will ask the community to help us fit names to the faces of these men who served for Australia in World War One.

16 responses to “Discovery of 400 World War One Photographic Portraits” The Curious Case of Basil ‘DeCourcy’: Anzacs and the alias