When I was a child after the Christmas tree and festive paraphernalia had been packed away in January I would make a scrapbook from the Christmas cards. At first they were just pasted in “willy nilly”. Later, I classified them into subjects like “bells”, “trees” and “angels” then progressed to making alphabet scrapbooks but getting pictures for “X”, “Y” and “Z” was tricky.

Fast forward a number of decades and I find myself now writing and researching the history of scrapbooks from the Victorian period for two scrapbooks in the Museum’s collection. It seems as well as amassing wealth and material goods, the Victorians were avid collectors. Being a museum curator I can relate to that. They were eager to demonstrate their interest in culture, the natural sciences, literature and art through their collections, which ranged from pressed flowers to art prints, and from shells to insects. The most popular form of collecting was the creation of scrapbooks, which were first put together by adults. These contained a haphazard arrangement of literary and pictorial cuttings. Much pleasure was derived from creating and examining these scrapbooks, which appealed to the industrious, sentimental, neat and thrifty Victorians. 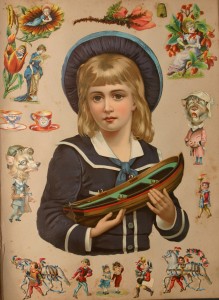 As weekly and monthly periodicals began to enter the home containing large amounts of fascinating information about the world at large (a bit like the coming of the internet into the home today) there was no longer a need to clip and hoard cuttings. The making of scrapbooks then became the amusement of children, especially when pictures, called “scraps”, were expressly made for gluing into albums. Early scraps were made from hand-coloured pieces but, from 1860 and the development of chromolithography, scrap manufacturers produced a large number of high quality pieces for scrapbooks. Victorian scrapbooks reached the peak of their popularity in the 1870s and 1880s. They were considered by later Victorian parents to be an educational tool to teach children how to organise and classify information and to develop their ‘artistic’ senses.

The two Victorian scrapbooks in the Museum’s collection which I researched are thought to have been put together by a child or children but unfortunately their provenance has been lost by the time they came into the collection. The pictures themselves are a charming reminder of the Victorian preoccupation with romantic and sentimental subjects such as baby farm animals, children with puppies and kittens, garlands of flowers, angelic children and fashionably dressed ladies. They also show a fascination with exotic places, people in national costume, mounted cavalry and humorous caricatures. A few of the pages have pressed and dried flowers and ferns as well as birthday cards with verses. It would be wonderful to know why the flowers and cards were kept as special keepsakes. The scraps are brilliantly coloured and at the time their appeal was not only visual but their glossy embossed surfaces also offered sensory stimulus too. 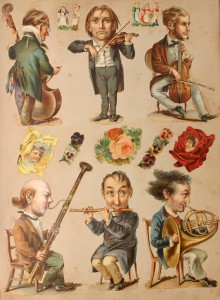 So what happened to my childhood scrapbooks? They almost certainly didn’t last too long. At the end of January my creation, which I had laboured over all holidays, found a good home. Dad was a country doctor and he’d take my finished scrapbook to the children’s ward at the local hospital.