Recently I gave some help to a heritage architect  working on the Broadway Central Park development. We were looking at the Kent Brewery photos in our Tooth & Co collection. I particularly enjoyed revisiting the Broadway photos,  timely given that Broadway is having its biggest makeover in decades.  As well as the vast Central Park project, UTS is gaining a new building on the northern side of Broadway while the street level podium of the UTS Tower will be transformed.

The last comparable change to the Broadway street scape took place during the  1930s. The fabulous panorama above was taken about 1935 near the corner of  Jones Street and features the shops and other businesses that lined the south side of Broadway, including Dangar & Co Undertakers and the Regent Hotel. Within a few years all of this was gone, with the sole exception of the Irving Street brewery, the large building in the centre.  Most of this building is still standing, one of the few Kent Brewery structures to be recycled as part of Central Park. 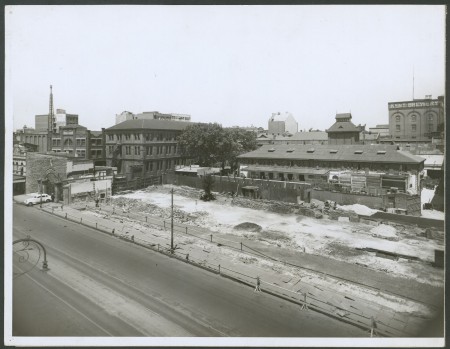 From 1938 Broadway was widened on its southern side; these two photos show the street  after the demolitions. By 1940 a new brewery gate had been built as well as well as four new hotels – Sutherlands (replacing the Westminster), the Clare (which replaced Ryans Hotel), the Regent and the Australian (replacing the Albion).  The Regent was owned by Toohey’s brewery, at that time a smaller rival to Tooth’s but cheeky enough to quickly build a new hotel at this prime site. You can see the new street line from the position of the Regent.

Apart from the Regent, these pubs have outlasted the brewery (Sutherlands is now called Bar Broadway, the Australian is now Abercrombie’s). The Clare, designed by leading pub architect Sidney Warden, is also facing a makeover which may not please its current student clientele. Tooth’s intended to sell off the land facing Broadway in shop-sized lots but for some reason never did. Instead the block from the Brewery entrance was occupied for some years by a display of Wunderlich products, including a fibro (‘Durabestos’) display home.

Broadway was first widened (on the northern side) during the first decade of the twentieth century, at about the time that Grace Bros opened its twin department stores on the Bay Street corner. For a few decades thereafter our end of town was the retail and social centre of town. As well as Grace Bros, Marcus Clark and Hordern’s had department stores in the Haymarket, which was also the new market district. This started to change from the 1920s when the City Railway started running, moving retailing back towards Market Street. Now Broadway is back, booming with new university and residential buildings and revitalisation of most of the old store fronts.

This change is happening despite Broadway’s ‘traffic sewer‘ character – clearways and heavy traffic have depleted street life on several Sydney main roads, including much of Parramatta Road and Canterbury Road. Recently it has been noticeable that new apartment buildings have replaced shops on parts of these roads, on the face of it not desirable locales for residential development. The same thing has happened on Broadway, with the Unilodge student apartments now occupying one of the Grace Bros buildings and the Quadrant apartment development closer to UTS.

2 responses to “On Broadway” The Clare is closing