This early pedal bicycle is a good example of a velocipede or boneshaker. It is on display in the Powerhouse Museum during August 2012 as part of a small exhibition titled ‘Bicycle: simple idea, complex evolution’ that I curated for the Ultimo Science Festival. Eight bicycles tell the story, starting in 1817 and moving through to 1994; bicycle innovation did not cease with the first pedal bike, the magnificent penny farthing, or even the modern-looking safety bike of 1885.

Riders had moved the first bicycles by pushing against the ground with their feet, and in the 1850s some tricycles were operated by treadles. The bike pedal was a very significant innovation because it harnesses the power of the body’s strongest muscles. Before the velocipede, most human-powered machines were turned by hand, using the weaker arm and back muscles, or via treadles, which use the leg muscles less effectively than pedals.

Parisian blacksmith Pierre Michaux and his son Ernest are usually credited with the invention of the pedal, and they were the first to mass-produce pedal bikes. One of their workers, Pierre Lallement, claimed the invention was actually his; moving to America, he took out the world’s first patent for a pedal bike, but he did not manufacture them. Disputes over priority are common in the field of invention, and we will probably never know the full truth about the invention of the pedal. 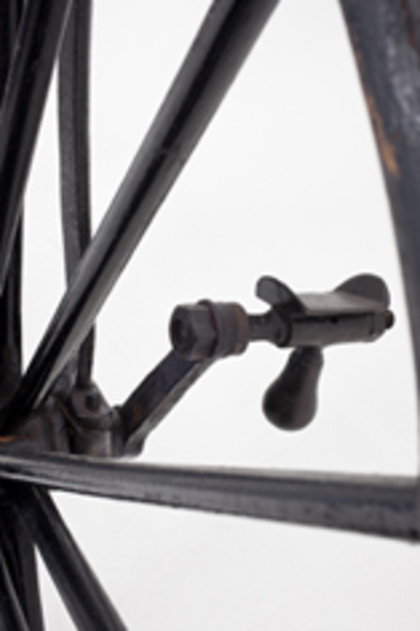 While we do not know who made this velocipede, it does have Michaux-style pedals. Note the weight, designed to ensure that the pedal always presents a flat surface to the rider’s foot. This was important because, to achieve balance, the bike had to be set in motion before the rider could mount it. Imagine running alongside this velocipede, vaulting into the seat and then planting your feet on the pedals!