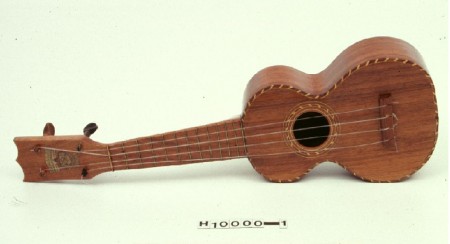 Recently ukuleles have been undergoing quite a revival with ukulele clubs and festivals springing up all over the world (there are at least seven clubs in Sydney). But Hawaiian music and ukuleles were very popular in Australia during the 1920s and 1930s and remained so until the 1950s. This ukulele from our collection was made in Hawaii in the 1930s by Jonah Kumalae, a prolific and famous maker who is credited with creating the first ukulele craze when his ukuleles were exhibited at the 1915 Panama Pacific International Exposition in San Francisco. 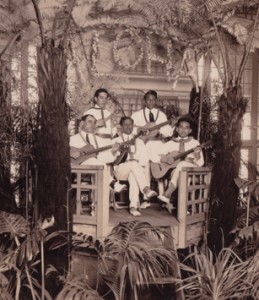 The Hawaiian Pavilion was one of the most popular with the millions visitors who attended this phenomenally popular fair. Amongst the other displays visitors were treated to music from the Hawaiian Quintet (pictured above) led by Henry Kailimai. One reporter apparently described the music as “weird, unworldly melodies that seem to rise and fall on the long swells of the Pacific….” Kumalae received a Gold Award and afterwards his ukuleles all carried the mark ‘Kumalae Gold Award P.P.I.E. 1915 Hawaii’ on the headstock. 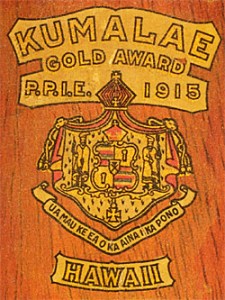 And its not hard to imagine the impact that hula girls (who also appeared in the Hawaiian Pavillion) had in 1915! 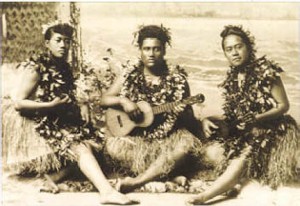 One response to “The Ukulele Craze”

Microcars
Discover the story of the rise Microcars through these striking examples of the tiny cars from pre- and post-WWII.
Exhibition