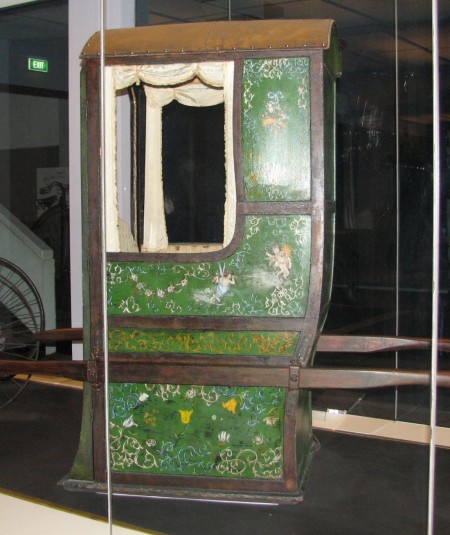 Recently I blogged about how sedan chairs (seen here on display in our Transport Exhibition) were used in London in the 1600 and 1700s. However sedan chairs were never really used in Australia so how did this peculiar item end up here?

Curator, Margaret Simpson recently did some more digging on the matter and discovered that its likely use was as a private telephone box!

It is believed that this sedan chair was brought to Australia during the early decades of the 20th century to be used as a domestic telephone box. It became fashionable in both Sydney and Melbourne for society women to acquire sedan chairs from overseas and use them in their homes. The sedan chair provided privacy, a comfortable seat during the telephone call and good acoustics as well as being seen as an interesting antique curio for the home.

This sedan chair was thought to have been brought to Australia by a Lady Clark. She may have been the wife of Sir Reginald Marcus Clark (1883-1953), Lady Frances Hanks Clark. Sir Reginald was a noted collector of English and Australian art, coins and antique china.

A more definite reference to this sedan chair occurred in 1929 when it featured in a collection of furnishings, china, glass and textiles on display at The Burdekin House Exhibition, Macquarie Street, Sydney, in aid of the Royal Prince Alfred Hospital. The chair was then owned by Frank Astor Penfold Hyland (1873-1948) who collected pieces of art and antiques while travelling for Penfolds’ wines. Both Frank and his wife, Gladys, were regular customers of the Sydney antique dealer, (Robert) Stanley Lipscombe (1918-1980), who, in 1945 offered to sell this sedan chair to the Museum.

The Museum purchased the chair in 1946.

At the back of the sedan chair is this cord – further proof of its second life as a seat for curious communications. 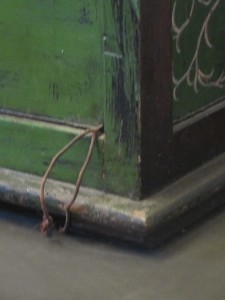