This ‘Object of the Day’ outfit is from a collection of high-end International and Australian designed clothing and accessories from Catherine Martin’s personal wardrobe. Acquired in 2011, by curator Glynis Jones, the outfit consists of an overdress with separate slip, a jacket and a shawl. It was designed and made by Australian fashion designer, Collette Dinnigan, in Sydney, Australia. The shoes were designed by Jimmy Choo, London, and made in Italy.

Catherine Martin is a significant figure in the Arts. She has worked as a costume designer, production designer and producer on major blockbuster film, theatre and event productions with her business partner and husband, Baz Luhrmann. Her film work includes, ‘Moulin Rouge’, ‘Australia’, ‘Romeo + Juliet’, ‘Strictly Ballroom’ and ‘La Bohème’. She is a pioneer for Australian women in the film industry, winning two ‘Oscar’s’ at the 74th Academy Awards for Best Costume Design and Best Art Direction. 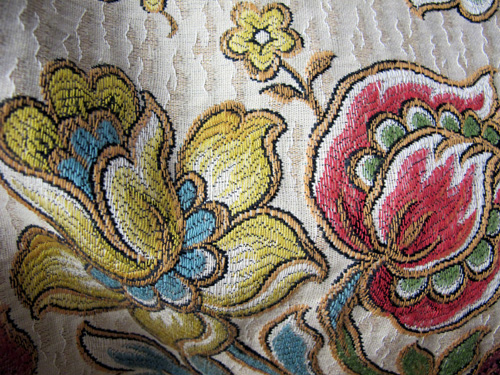 I chose this outfit because it was worn by Catherine Martin to the Sydney opening of the blockbuster film ‘Moulin Rouge’ and reflects the drama and femininity of the costumes, she created in the film. The brightly coloured floral patterns, the sequins, and the elaborate, purple fur shawl combined together, can be interpreted as a ‘real life’ version of the showgirl costumes in the film.

The Registration Department is responsible for the information management, location and hazard control of all the objects acquired by the Powerhouse Museum. As an intern assisting in this department, my role is cataloguing the garments and accessories from Martin’s personal wardrobe. The clothing includes work by well known designers such as Chanel, Mui Mui, Sergio Rossi, Jimmy Choo, Collette Dinnigan, Willow, Easton Pearson, Akira Isogawa, Manolo Blahnik, Jill Sander, Comme des Garçons and Prada. As well as cataloguing Martin’s personal wardrobe, I am cataloguing film costumes from the many Catherine Martin / Baz Lurhmann productions, acquired at the same time by curator, Glynis Jones. Underwear for down there