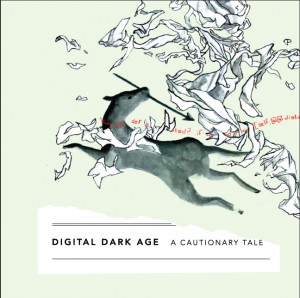 Recently we were doing the final proofs for a new book about the issues of long term preservation of digital information. I came across a discrepancy in two separate entries on the same object that introduced its own issue about information preservation.

The book, Digital Dark Age: a cautionary tale, is a collaboration between the Parramatta Heritage Centre and the Powerhouse Museum and draws on the graphic art work of Matt Huynh. It looks at the issues associated with the storing of personal and society’s information records using technology that is likely to be obsolete in a few short years.

One of the Museum’s objects that feature in the story is a Sumerian clay tablet which is a record of a financial transaction that took place 4000 years ago.

The tablet is mentioned in the body of the text and in a glossary of objects. A translation of the cuneiform script on the tablet in the body text referred to a receipt for ‘..five sheep, one lamb and four grass-fed male kids..’.  Later in the object glossary the caption referred to ‘receipt issued- Total: five grass-fed sheep, Total: one lamb. Total: four male kids’.

I drew a red ring around both entries and made a note to find out whether the sheep or the kids had been grass-fed and wondered if it was me who was the duffer who had incorrectly transcribed the information from the acquisition record or whether I could blame someone else.

I went to the Collection’s  database record and found that the transcriptions for the front and back sides of the tablet were the source of the error. Obviously who ever transcribed the information from the original paper file had made the mistake. (The tablet had been acquired in 1985 before the museum had a computer based collection records system.) That let me off the hook.

So I went to the original file to find out the true identity of the grass-eaters but again  found the accession form had the same discrepancy.

I had decided that modern museum professionals should all hang their heads in shame and that we would have to get the cuneiform translated again when I found a note at the very back of the file – the original translation.

Note to self: if my records are going to be preserved I’ll have to make sure they are correct. International Museums Day 2012, behind the scenes Fifty Years in the TARDIS: the golden anniversary of Doctor Who