A bit of background…As the new millennium was about to begin composer and violinist Romano Crivici and I came up with a crazy idea – could we get two almost identical violins and test them against each other to see if their respective sounds changed over time?

Most people seemed to think that the sound of an instrument did change, but had anyone really tested it? And in fact, could it be tested? Now for the really crazy part – it’s not uncommon for violins to be played for a very long time, so if tests were possible, would they need to be conducted for the next 200 years or so to really see what changes were happening?

If we were going to go ahead with this idea we’d need to use brand new violins and a skilled maker who could attempt to make “twins”. Romano was keen to get a new violin and liked the work of Sydney maker Harry Vatiliotis. The Museum also commissions musical instruments for its collection from time to time from local makers which helps to document their work and their thoughts behind making. Harry had worked with the esteemed AE Smith, thought by many to have been Australia’s most renowned violin maker, and whose workshop had seen some of the leading Australian makers pass through it such as William Paszek, William Dolphin and Lloyd Adams. The Museum’s collection already had instruments by Smith and his associates including Sampson, Griffin, Paszek, Dolphin, Clarke, Newham and Kitty Smith so a Vatiliotis would help to make the collection even more complete. Harry kindly agreed to the idea of trying to make two violins from the same larger pieces of timber and as similarly as he could, one for Romano and one for the Powerhouse. These were finished in 2001. 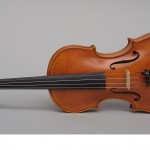 To complete the plan – call in the scientists! Thankfully Professor Joe Wolfe, Associate Professor John Smith and then PhD student, now Doctor, Ra Inta from the University of NSW Physics Department’s Musical Acoustics Lab also agreed to put some tests together on these two instruments to see if changes could be measured.

Apart from physical tests done on parts of the violins during their construction some perception tests were also carried out to see if musicians, both as audience and players, could hear differences in the violins and be able to pick one from another. Another thing we wanted to see was if a violin played by a player regularly and was subjected to different environments also differed in sound from an instrument played on only once or twice a year in a museum and held in a fairly constant environment.

Several tests were carried out over subsequent years to record any changes. 2011 saw the 10th anniversary of the start of what is called the Violin Twins Project and gave a chance for Harry Vatiliotis and his son Michael to come in to the Museum a few weeks ago to see and hear the violins and see how they’ve been travelling. Romano brought his own violin and played both it and its Powerhouse Twin. It was a great opportunity to reunite the maker, the player and the instruments for these informal comparisons.

It should be stressed that this latest comparison was just that – a chance to compare the sounds after 10 years. It was not an official scientific test under perfect conditions. However, the general consensus amongst those present was that both instruments still sound very similar with the Powerhouse violin having a more open sound and Romano’s being a bit darker in tone. However, as the Powerhouse instrument had relatively newish strings and Romano’s older played-in strings this may have also accounted for some of the sound differences.

We’re all waiting to see what these two violins will sound like in 2211!

One response to “The Violin Twins 10th Anniversary”