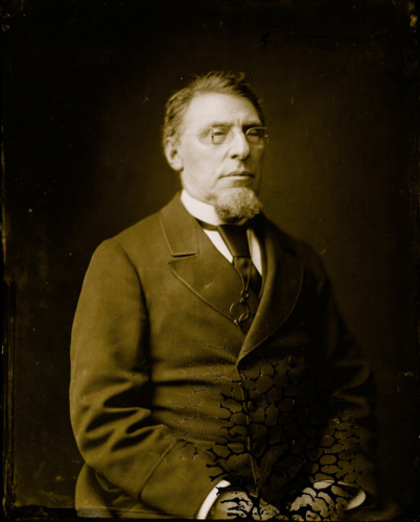 Over the last couple of months I have been working on a previously uncatalogued collection of large format, 50.8 cm x 44.5 cm, glass plate negatives donated to the Powerhouse Museum in 1969. The 28 collodion portraits were found in a chest in our stores at Castle Hill and have been identified as all being originally taken by the Freeman Borthers Studio here in Sydney. We are currently conserving and cataloguing the photographs but hope to be posting them onto flickr commons by the end of the year for researchers to use.

The Freeman Brother Studio lays claim to being the longest running studio in Australia. It was established as the ‘Freeman Brothers and Wheeler’ by William Freeman and his brother James in George Street in 1854; it was still running nearly 150 years later. James was the more experienced of the two having worked in Richard Beard’s gallery in Bath before coming to Australia and was certainly instrumental in the success with which they plied their trade in Sydney.[1]

One of the keys to their success was their continual upgrading of equipment and premises to deliver the latest techniques. As a result they attracted the cultural elite of Sydney to their studios where they were photographed using the techniques of the day. Thus surviving examples can be found as daguerreotypes, ambrotypes, collodion glass plates, flexible sheet negatives all of which were then used to make albumen, gelatin and platinum prints on card, glass, and paper.

In 1864 the brothers undertook a major renovation of their studio which opened to the public in January 1865. Here they claimed … the most artistic arrangements in the distribution of light and shadow have been effected in their Gallery. In carrying out these alterations, Messrs. Freeman Brothers have availed themselves of the very best and latest improvement in the construction of a Photographic Studio, which have been forwarded them from home, “and which they have adapted to the requirements of ‘ the climate according to the dictates of their experience. By a simple and beautiful arrangement, any kind of light can be thrown on the sitter, to suit the varieties or dress or complexion, so that the sunniest effects of a Lawrence or a Reynolds can be obtained, varying down to the most somber and effective tones of a Rembrandt. These remarks Messrs. Freeman wish apply to all the varieties of Photographic Portraiture, from the largest style adapted to Photography down to the universally popular Carte de Visite. While announcing the above important improvements, Messrs. Freeman wish to recall the attention of the public to their beautiful Sutton’s Panoramic Apparatus from the camera, of which they have now a splendid and varied collection of Views of Sydney and its neighborhood …[2]

In January 1867 James Freeman went to England leaving his brother and their partner Victor A. Prout to take control of the business.[3] Why James left is unclear, perhaps illness or an argument but it was clearly unexpected for it was February before the official notice of his retirement from the studio of ‘Freeman Brothers and Prout’ was published in the papers. From this date William and Victor Prout took over the formal management under the name of ‘Freeman and Prout’.[4]

In 1868 the studio acquired over 20,000 negatives from the demise of Dalton Brothers, one of Sydney’s other pre-eminent studios. It turns out the acquisition was not just photographs for in advertising this acquisition they also called attention to the tinted and coloured cards and miniatures produced by Miss Hunt, … for so long favourably known while in Mr. Dalton’s employment …. Miss Hunt must have greatly added to the studio for the surviving coloured work from Dalton Studio ranks among the best produced in this period in Australia.[5]

James Freeman’s retirement appears to have been accompanied by a desire to return to England for in 1868 both brothers returned to there. This arrangement lasted only for a few years until William returned to manage the Sydney studio after the death of James in 1870. The studio suffered a huge blow in November 1871 when a fire on the premises destroyed their entire stock of negatives, including those acquired from Dalton Studio’s.[6]

In 1890 Freeman Brothers passed to William Rufus George who managed the studio until his son Alfred took over in 1903. Harold Cazneaux worked for the studio from 1904 to 1918, a period which saw them embrace a more informal style of portraiture and wedding photography. During the depression the studio was in competition with the street photographers who would snap passers by in the street. Valentine Waller who managed the business though this period was instrumental in lobbying for the State Government to bring in the regulation and registration of this form of photography in 1937. The company continues to survive and evolve moving to digital photography in 2003.[7]

The scale of their enterprise did not seem to affect the quality of the work they produced; in fact the studio from its inception spared no effort in touching up, and printing, their photographic prints. This combination of high quality work and patronage by the elite of Sydney makes their early work excellent examples of nineteenth-century Australian photography, illustrated by their winning silver and bronze medals at the London International Exhibition in 1862.