Fifty years ago today, on April 12, 1961, Soviet cosmonaut Yuri Gagarin was launched into orbit, becoming the first person in space. In the Cold War climate of the times, this event was not only a major technological and scientific achievement, but also a tremendous propaganda victory for the Soviet Union in the Space Race with the United States. As a result of his historic 108 minute spaceflight, Gagarin-a genial, modest pilot in the Soviet Air Force- was catapulted to fame as a popular hero in the USSR and a global icon of the supposed “technological superiority” of the Communist system.

In 2004, the Powerhouse acquired two unique photographic portraits of Gagarin taken in the early 1960s that provide a glimpse of the man behind the icon. Both are the work of Valentin Shkolny, a Ukrainian-born photographer and artist who was at that time a prominent Soviet photojournalist. He frequently photographed Gagarin and his cosmonaut colleagues for TASS, the Soviet news agency. (After the fall of the Soviet Union, Shkolny migrated to Australia and has continued to work as a professional photographer and artist).

The first photograph (shown above) is a rare informal portrait of Yuri Gagarin in civilian clothes, sporting a ‘five o’clock shadow’, taken in his home at the cosmonauts’ training centre Zvezdny Gorodok (“Star City”) near Moscow. Gagarin permitted Shkolny, who was known to him from his photojournalism work, to visit his home briefly and take this photograph while Shkolny was in Zvezdny Gorodok on another assignment. Unlike many posed official ‘informal’ photographs of Gagarin and his family, this portrait emphasises Gagarin the man and hints at the underlying tensions being imposed on his private life as a result of his status as Cosmonaut No. 1-pressures that would lead to Gagarin developing a problem with alcohol.

The second photograph (below) is an interesting example of an ‘informal’ version of an official Soviet picture. Propaganda images of Gagarin surrounded by admiring crowds of adults and/or children are common and this photograph was taken by Shkolny while he was covering Gagarin’s reception at Zukhovsky Air Force Base following his return from a goodwill tour. In addition to his ‘official’ images of the crowd of children (said to be the children of fellow cosmonauts) welcoming Gagarin, Shkolny snapped this shot of Gagarin in an unguarded moment, showing his unfeigned delight in being with the children. Gagarin, by reputation, was very fond of children and this image once again captures Gagarin the man, as distinct from his more formal persona of ‘Gagarin the hero’ or ‘Gagarin the international public figure’.

Today, the rivalry of the Space Race has given way to the partnership of the International Space Station, but Yuri Gagarin (who was unfortunately killed in a plane crash in 1968) remains an international icon as the world’s first space traveller. Since 2001, global Yuri’s Night events have been held on April 12, to celebrate the achievements of human spaceflight in exploring beyond our home planet. Today, in celebration of the 50th anniversary of Gagarin’s flight, more than 420 Yuri’s Night events will be held around the world (and beyond!) and the United Nations has officially designated the date as International Spaceflight Day. 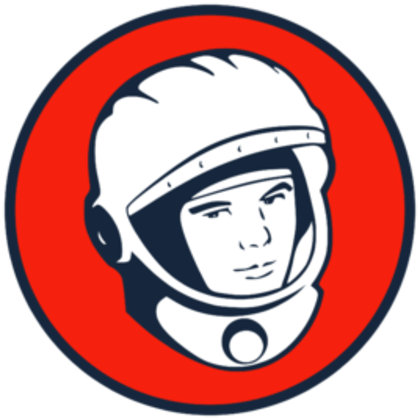 It’s not too late to join in the celebrations. There are public Yuri’s Night events planned in several places around Australia (check the website), or you participate in the global premier of the film First Orbit-a documentary by award winning film maker Chris Riley (In the Shadow of the Moon) that recreates Gagarin’s orbit around the Earth, using footage specially shot by the astronauts on board the International Space Station. This film has been specifically made to celebrate the 50th anniversary of spaceflight and is being premiered around the world today. It can be downloaded free here.This film will be screened at the Powerhouse Museum and Sydney Observatory from today. Other Yuri’s Day activities at the Powerhouse have had to be rescheduled due to illness, but they will take place later in the year, so keep an eye on the Museum’s website for further information.

Of course, April 12 this year also marks the 30th anniversary of the first Space Shuttle launch took place, so today is a significant anniversary for US spaceflight as well. This event will be the topic of a future blog, so look out for it soon.