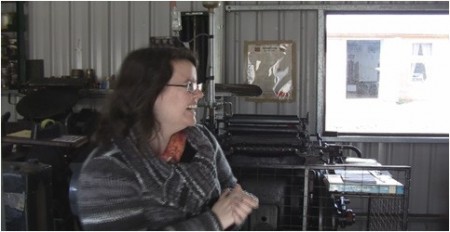 I will always remember the day I was told I had been awarded the Powerhouse Museum Movable Heritage Fellowship for 2009. It was just one of those unforgettable occasions. It wasn’t too long before Christmas and I was making hundreds of tiny gingerbread men to give away as gifts. I was literally up to my elbows in gingerbread. My mother was holding the phone to my ear, I was desperately trying to rid myself of bits of dough and, as it turned out, the dough was merrily drying out. This gingerbread experience was a sign of the year to come – hectic, exciting, messy, difficult, trying, unforgettable, terrifying and absolutely wonderful.

At the time of applying for and completing the Fellowship I was doing Professional Experience at Hornsby Shire Historical Society Museum as part of a Masters Of Museum Studies at Macquarie University. It was strongly recommended to me by my University Supervisors that I apply for the Fellowship, but two days before the close of applications I had still not thought of a project to apply with. Then, I was sitting talking to one of the Museum Volunteers, Joan, about her Father, Albert French. Albert had been involved with The Advocate Newspaper in Hornsby, a newspaper which is still running today. She showed me what could only be described as ‘a large lump of metal’ which was thought at the time to be the only remaining machinery left from the days of Albert’s time as editor.

It was downstairs at the museum, on its side, and nobody knew what it was, other than some type of press, or what it had been used for. My project was born, with an unidentified lump of metal at its heart. I applied with an ‘I think’ . . . and won.

Of course, it didn’t take too long to identify what the press was, how it had been used, and why, in itself, it was essentially unimportant. Its role in my project was essentially done, other than being the point from which the tangents of my project grew. My project itself though was just beginning and ‘the mind map from the black lagoon’ as a few people involved in my project described it, had just begun to grow. Soon, I was committed to ‘saving’ the original editions of The Advocate held within the collections of Hornsby Shire Historical Society. I rehoused each individually bound book of papers in a new, archival storage box, and digitised each and every page of paper (over 19000 images), making them available digitally, to reduce the stress on the original documents. I also made them searchable, increasing the usefulness of the papers as a research resource. I became involved in documenting the process of letterpress printing, meeting many of the wonderful people who had worked in the industry. I made films of the process, using the working collection of equipment housed in the Gulgong Pioneer Museum, and greatly benefited from the expertise of the people maintaining the collection. I even gathered a large collection of typeblocks, had them printed (by the wonderful Arthur Johnson of Gulgong Pioneer Museum) and made available online in a Virtual Typebook.

On top of these projects, the main outcome of my Fellowship was a virtual museum, with four separate ‘exhibitions’:
• The Advocate Exhibition focused on the development of the newspaper and associated businesses.
• The Philanthropy Exhibition explored the French family, who were largely responsible for the success of The Advocate, and were also greatly involved in the progress of Hornsby Shire.
• The Letterpress Printing Exhibition, including the video, showcased the process and equipment used in printing The Advocate and most other publications at the time.
• The Collingridge Exhibition is centred around the man behind the first book ever printed by Advocate Press, George Collingridge.
You can visit the Online Museum here, though this version has not been updated while I work on its future.

At this point, you might be forgiven for thinking the Fellowship was complete. In some ways, you would be correct, but in many ways you would not be. Although the initial project may have been complete, the Fellowship was the beginning of many things. I met many people who I have formed strong, continuing relationships with. They supported me throughout and beyond the fellowship and have encouraged my ideas and dreams. Their support allowed me to blossom, and pursue areas of interest I had never thought of, building my confidence, both in my own abilities and my ideas. It was through the people I met while doing my Fellowship that the idea for my first blog was born. The Tingle Factor Box, a history blog for children, was begun during the Fellowship, with the support from these people, and is now a successful blog in its second year. You can visit the blog here. Another blog is currently being developed, around a collection which began to be formed during my Fellowship year.

The Fellowship cemented my interest in further study, and now I am looking at embarking on a PHD. I acquired many valuable skills, which will be of use in my career and many of which are already being used in my role as editor for the Macquarie Museum eZine, aMUSine. You can read the most recent edition of the zine here

The project itself was also a springboard for further research. Remember that fourth exhibition, centred around George Collingridge? I had become thoroughly fascinated by him, and decided he deserved more attention. Throughout this last year, I have been working with his granddaughters to develop a new online ‘museum’ dedicated to this extraordinary man. It is hoped that it will be launched in the next few months.

Finally, my advice to prospective Fellows. The Fellowship has been one of the best and most rewarding experiences I have had, and I thank the Museum and its staff for that. It has taught me much and inspired my future research and projects, and I would commend anyone considering applying to do so.

Never think ‘it can’t be me’ because you never know, it just might be. Look at me, my proposal was full of questions, ‘I thinks’ and ‘I believes’. It even turned out that the original item I set out to research played only a small role in the project as it developed. That was another valuable lesson I learned though. ‘I thinks’ and ‘I believes’ are useful springboards for things to grow from. Everything begins with a belief. Perhaps it is fitting then that I close with another. I believe the fellowship is as much about your potential as it is about the potential of your project.