The purpose of this extended note on Tristram Cary is to provide a context within which to introduce several electronic music instruments within the collection of the Powerhouse Museum. These will include two pre-synthesiser devices, early EMS synthesisers and other custom built objects that are now part of the museum’s collection.

Tristram Cary, an Adelaide based electronic and computer music composer, was a son of the author Joyce Cary, grew up in a musical family and learned to play the piano from the age of five. He entered University (Oxford) in 1943 to study Classics but kept up his interest in music. This was during the Second World War, so on turning eighteen that year he volunteered for the Royal Navy. Having had teenage experience in building radios and other bits and pieces, he gained a post as a wireless mechanic and studied electronics. He was appointed a Radar Officer in 1944, installing and calibrating radar sets on board ship.

During this period he continued his interest in music and began to teach himself musical theory and composition. He heard of the development of tape recording while in the Navy and he realised that he could edit and make musical works by cutting up the tape with a razor blade and re-splicing it. As he later said:

It occurred to me that … here was a chance to have a new sort of music altogether. The editing capacity meant that you could cut sounds together that were not normally together.[1]

He was de-mobilised from the Royal Navy in late 1946 and by then, effectively, a qualified electronics engineer he turned these skills acquired as a radar operator to making musical devices. He recognised that he

could use [his] skills to make [his] own studio, and design [his] own gear, and so for very little money there was a mass of surplus stuff. There was the junk of three armies: the American, the German and the British Army, was in the London junk shops and you could go around, pick up gear cheap, sometimes absolutely brand new still in the original case. Probably designed for another purpose, but if you knew what you were doing, you could make it do something different.[2]

At the end of his time in the Navy he finished his degree at Oxford and then enrolled to study music at Trinity College, London. His background in electronics meant that he understood the theory that any sound could be constructed through the summation of a suitable ensemble of sine waves. With the end of the war tape recorders began to become available in the UK but were the sort of things that only the BBC could afford so Cary used his skills to try to build a recording device disc from a turntable and record cutting head, which used a weight to turn the disc at a constant speed, but it didn’t work very well.[3]

His original attempt to build a disc cutter led him to later purchase a 78rpm disc lathe, with which he began making his own version of musique concrète, recording sounds he wanted to use, manipulating them through amplification and cutting them into his instrumental recordings, only discovering the French work of Pierre Schaeffer and his colleagues later.[4]

In the period of the 1950s electronic music had little presence but there were a few people who were doing things that made it possible to begin to think about it.
Schaeffer, in France, had been using tape recorders to capture sounds from the urban environment to cut and splice into complex musical adventures that brought industrial sound to the radio and the concert hall. The radio station Westdeutscher Rundfunk (WDR), in Cologne, Germany, had assembled an electronic music studio using surplus radio test equipment. Their view was implacably opposed to the French process of manipulating sampled sounds. For the Germans the idea was to produce sound purely electronically using only summations of sine waves. The master of this process was Stockhausen but even he relented by the 1960s when he produced Gesang der Junglinge.

Cary began to experiment with electronic sound in 1947, building variable-resistance tuned oscillators similar to those he used in the Navy and a keyboard with electrical contacts from an old Harmonium.[5] He was mainly writing instrumental music at this point and didn’t produce fully electronic music until well after he moved to Nevern Rd, Earl’s Court (in London) in 1951, where he built a new studio based on disc-cutting machines. The Bradmatic tape recorder became available in 1952 and Cary bought one with which he began composing electro-acoustic and orchestral music for radio and film. His first properly electronic work was for the radio play The Japanese Fishermen (1955), which required special sounds to represent the sea, the fishermen rowing and the mystery of their illnesses, the result of radiation from American nuclear bomb tests in the Pacific.[6]

His first great success was the instrumental music score for the film The Ladykillers (1955) starring Alec Guinness and Peter Sellers. However his primary source for sound was the recording of everyday domestic sounds manipulated with the disc cutters and tape recorder. He continued to write music for radio, film and television producing the sound for Richard Williams’ The Little Island which won the best experimental film at the 1958 Venice Film Festival [7], and the radio piece The Ballad of Peckham Rye (based on the novel by Muriel Spark and directed by Christopher Holme) for which he won the Premio Italia prize at the Concorso Internazionale Per Opere Radiofoniche E Televisive, Verona 1962.

All of these works consisted in a mixture of instrumental sounds, musique concrète and electronically generated sounds. 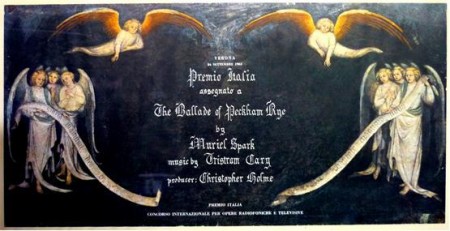 [5] Fitton, Tristram Cary: Pioneer of Electronic Music in England. In the Ford interview he says 1949, but the Fitton thesis has a cartoon drawn by a friend of his, showing the keyboard and other bits of valve electronics, which is dated 1947.